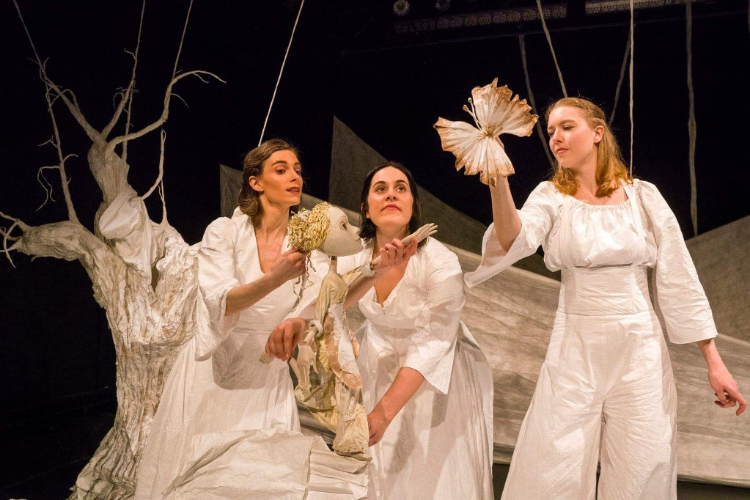 BOTTOM LINE: With a tender yet powerful tale of a woman’s journey through self-discovery at its core, Unfolding is an exquisite feast of puppetry storytelling with magic in every one of its crinkly folds.

Remember a time when pencil shavings were butterflies and chalk dust was snow? Remember when every dewdrop was a precious gem, and every bird a miracle? Remember a blank sheet of paper before the first fold?

Margarita Blush’s Unfolding seems a delicately crumpled page pulled from a dusty book with a cracking spine. Handle with care, it seems to say, with a set and all of the props created almost, if not entirely, out of paper: a wrinkly tree; a rolling landscape that’s literally rolls of paper with peculiar symbols; the sloped top of a tiny house. The moon rises as a dollop of light behind a sheet of paper, and then reappears as an elegant orb (also made of paper) atop the branches in the background. The trio of performers (Emily Batsford, Monica Lerch, and Kāli Therrien), or the Moirai, pluck out berries of starlight (fairy lights attached to hanging paper branches) to bless the birth of our puppet girl (a hauntingly gorgeous creation by Dimitar Dimitrov and Petia Dimitrova): a shadow of a small foot within a womb, a curious face poking out of a cradle—the cradle flips over into a parachute, and the little girl drops into her fate.

So we meet Aya the puppet girl, with her pigtails, inquisitive eyes, and insatiable appetite for adventure. We watch her wade through obstacles and learn how to get up from every fall. New discoveries, new discoveries, and more new discoveries—every object you see on stage is something unexpected, until it yet again becomes something else. Without any dialogue, the performers are both facilitators of the story, as well as at times stepping into Aya’s shoes.

The girl quickly grows into a maiden, the transformation marked by a simple yet effective moment of shadow play in which Lerch loosens her own pigtails, paralleling the transformation of the puppet. And just like in every fairytale, the girl meets a boy. She teaches him to fly, and the age of innocence becomes a berceuse filled with newfound emotions. They share a boat under the moonlight, and the boat tumbles over into a canopy, under which the young lovers share a—

In fact, I don’t think I’ve seen many stage kisses—puppet or not—that are as satisfying.

The strip of paper that used to be chimney smoke gets wrapped into a baby bundle as the lovers turn into parents. But if you thought this would be simply a sweet coming-of-age story, you’d be wrong. Like with the second act of Into the Woods, Aya’s tale is so much more than the wonders of a child and the romance of a maiden.

For the rest of the show you continue to experience, and sympathize with, stages of Aya’s life. When the maiden turns into the mother, you see the familiar choice between household responsibility and career, delivered with two simple sound effects: the ring of an alarm clock and a baby’s cry, the latter masterfully vocalized by Lerch, who manages to create a wide range of emotions for the invisible infant. Batsford and Therrien also never cease to impress with the amount they’re able to convey with a single look.

The show is a triumph in puppetry design. The gradual shifts in Aya’s age are presented with subtlety yet nothing short of genius, from her unfolding dress as she matures, to the painting of her eyes—which capture both the wide-eyed wonder of a young child as well as the hollowness of a woman who’s lost her sense of self amidst life’s turmoil, to her changing straw hair—pigtails, then cascading locks, then practical knots. The use of light and shadow is also magnificent, adding breathtaking texture and depth to what can easily become a two-dimensional display. This is indeed 70 minutes of complex, finely tuned storytelling: there isn’t a single choice unexamined, or an object left unused—down to the barely noticeable elastic band around a performer’s wrist.

Another highlight is the music. Aside from some pre-recorded voice-overs and incidental sound effects, the show features an original score by Amir Khosrowpour, performed live by Lena Gabrielle. It highlights the important narrative moments without disrupting the visual storytelling, and surreptitiously helps the audience track Aya’s emotional journey.

If you caught and loved James Ortiz’s The Woodsman a few years ago, Unfolding is the sort of theatre that will give you life. Yet while it is a deeply human, achingly tender story, Unfolding is also something that could only have been created and performed by women. It's an allegory of the female experience—learning through falling, through collecting wounds, through understanding that scars become maps to life's next chapter. As Aya recreates herself feather by feather, and the hollowness in her eyes eventually becomes an unreadable wisdom, I wonder: where does a woman find her strength?

Unfolding simply seems perfect, and I don’t give out such high marks easily. The aesthetics are so delicate they make you weep, and yet the truth the piece reveals will strike you hard in the gut. It’s a deeply tragic moment when Aya’s paper flower gets flopped downwards into a broom, and the butterfly turns into a duster, as life turns imagination into practicality. You realize then that underneath the calloused skin of every mother lives a fairytale princess who can still fly. And Unfolding is undoubtedly a fairytale—the best kind there is, because it shows not only truth, but also hope.

(Unfolding plays at The Tank, 312 West 36th Street, through April 7, 2019. The running time is 70 minutes with no intermission. Performances are Fridays at 8, Saturdays at 3 and 8, and Sundays at 3 and 8. Tickets are $20 and are available at thetanknyc.org. For more information visit margaritablush.com.)

The cast is Emily Batsford, Monica Lerch, and Kāli Therrien.