Off Off Broadway, Play
Runs through 6.22.19
Westbeth's The (Bell Labs) Boardroom, 463 West Street 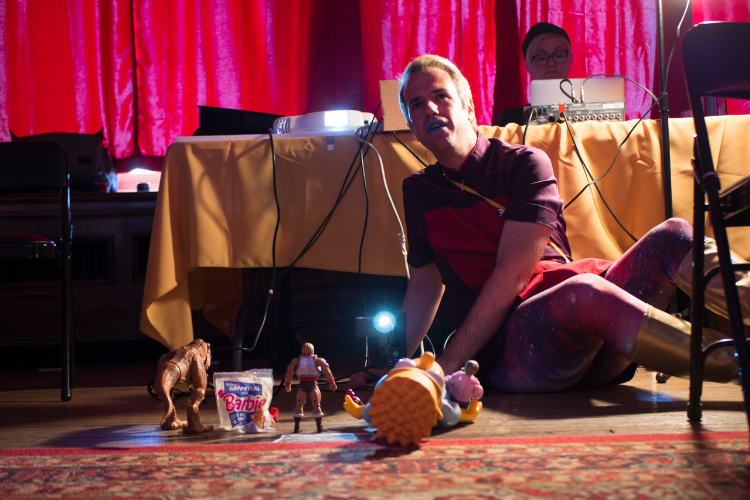 BOTTOM LINE: The final frontier may be knowledge of self—and toys are a meaningful expression of who we are and who we want to be.

What do science-fiction and fantasy toys have to teach us about ourselves? Jonathan Alexandratos enters the Westbeth Boardroom—now the classroom—clad in a modified Star Trek: The Next Generation uniform with many highlights to reflect their non-binary identity. Jonathan, who teaches at Queensborough Community College, is here to conduct the final session of this year’s English class, but in a much more personal manner than what (we imagine) came before. Each student/audience member receives a folder with several writing prompts, and an envelope with a special toy object!

Through these writing exercises, which are interspersed with useful storytelling ideas from the likes of Vivian Paley and Sandra Cisneros, along with some background on the history of certain toys, we "students" may well find a way to express deep truths. For example, a dinosaur figurine and its related assignment leads to a special way to stop the voices of “trolls” in one’s life—because, Alexandratos suggests, the Troll toy fad of the 1990s gave way to the Jurassic Park movie series.

Several toys take their place in the projection at the front of the classroom. We learn about Jonathan’s fondness for the G.I. Joe Crimson Guard Immortal action figure, a masked enemy soldier who, by virtue of his concealment, could stand in for anyone, including a transgender person. We hear about the 1980s He-Man toy and cartoon craze, which came from the mind of beleaguered Mattel designer Roger Sweet, who decided he “had the power.”

And for all those who did not see their body types reflected in the Barbie dolls of their youth, Alexandratos adds a story with a twist. As Jonathan went through puberty and was pushed towards the masculine side of the spectrum, it became harder to ask for the “girl” toy with their Happy Meal. Bizarrely, in 1975 Barbie’s friend Skipper had a special feature: when you wound her arm, her bust increased. Jonathan poignantly likens puberty to “someone twisting your arm.” An anorexic phase linked to the pursuit of a certain “feminine” ideal followed. Despite all of these adverse circumstances (and, we are reminded, the violence that besets many non-binary people), Jonathan is happy to be the person they are today.

This lovely, personal story is helped by its accompanying writing sessions for the audience. I had the chance to share one of my writing responses, which was both scary and extremely comforting. Jonathan knows more than most about sci-fi toys; they have edited a book on the topic. Alexandratos also comes dressed for the evening, wearing what used to be known as the "female dress” uniform from the Enterprise-D, blue lipstick, galaxy tights, gold boots, a pin related to the Civil Rights graphic novel The March, and a purse shaped like a waffle. This judgment-free show should not fail to inspire.

Toys 101: The Last Class is written and performed by Jonathan Alexandratos.