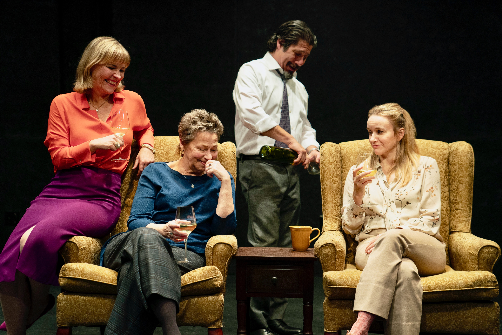 BOTTOM LINE: An eerily funny yarn about yearning to commune with the dead.

The Thin Place begins with a childhood memory. An unassuming woman, Hilda (Emily Cass McDonnell), tells the audience she’s been missing her late grandmother, and muses about a game they used to play when she was a little girl. Her grandmother would write a word on a pad of paper, clasp it to her chest, and prompt Hilda to listen for the word to come to her. According to Hilda, she got pretty good at "hearing" these messages. After her grandmother passed away, however, Hilda struggled to connect in the same way.

Now a grown woman, Hilda is more determined than ever to re-establish contact with lost loved ones. Enter Linda, a professional psychic (Randy Danson), who describes her abilities as being “like a radio antennae. I tune my dial, and all these voices start comin’ at me.” Hilda meets Linda at a "sitting"—a kind of séance—and wouldn’t you know, Linda hears Hilda’s grandmother from beyond the grave. From that point onward, Hilda is drawn to Linda, following her around, puppy-like. Linda spins yarns about her rough upbringing in England, while Hilda listens, rapt. But their affections are lopsided, not just in terms of who talks and who listens, but who gives and who receives.

When Hilda accompanies Linda to a small gathering with her friend Sylvia (Kelly McAndrew) and smarmy cousin Jerry (Triney Sandoval), the wine flows freely, tempers flare, and the power dynamics shift, from light to heavy, warm to dark. And this is when The Thin Place sneaks up on you. Part of the fun is that none of the characters are easy to pin down relative to each other. Hnath’s dialogue is rich with spiky interactions. Director Les Waters keeps the tension rising; it’s uncomfortable to watch, but also riveting.

In the supporting roles of Sylvia and Jerry, McAndrew and Sandoval are engaging foils for Danson’s no-nonsense Linda. By contrast, McDonnell (who originated the role of Hilda at the Actors Theatre of Louisville’s Humana Festival), remains inscrutable nearly throughout.

All design elements are minimal and hyper-intentional: Mimi Lien's set consists of two arm chairs and a small table on an otherwise empty black stage (although don't let the minimalism fool you—like much else about the show, there is a lot more about the set design than is obvious at first glance). Mark Barton's strong lighting choices—the house lights remain on for much of the piece—help implicate the audience in the action. Oana Botez' costumes and Christian Frederickson's sound design are similarly unassuming yet effective.

As each character comes to the fore and shares a story, the audience must reconsider earlier revelations and reconcile what they’re heard with what they’re seeing. The effect is at times creepy, but also comedic, making for a night at the theater that will stay with you long after the lights go out.