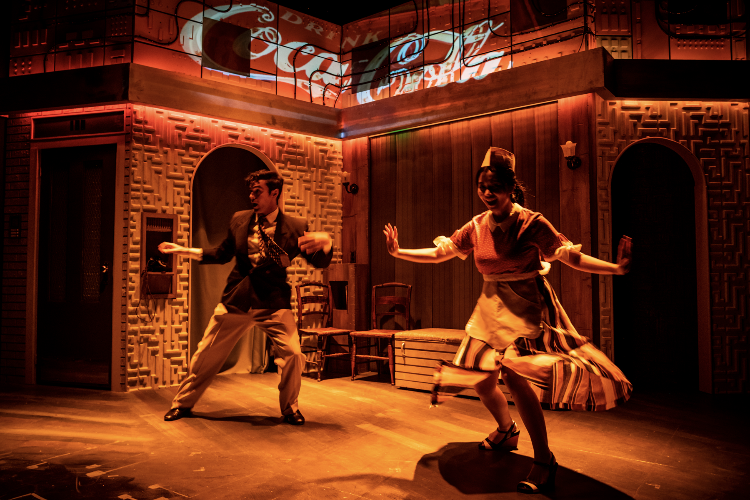 BOTTOM LINE:  A clichéd, time-traveling comedy about one desperate woman’s search for life’s meaning in a constantly evolving world.

Pamela Stark (Margot White) is having a rough week. Despite her best efforts to stay on top of her work as an antiquarian book seller, her printer is acting up and her personal life is falling apart. She’s just received divorce papers by text, Alexa seems to be speaking to her with a sneer, and tech support has put her on what feels like perpetual hold. She’s desperate, angry, and seemingly completely alone.

Maybe, she thinks, her problems stem from not belonging in the fast-paced technological world of today. Perhaps she should have been born in another era. As this thought swirls, a tech expert (voiced by Lauriel Friedman) emerges, and after advising Pamela to hit several buttons, presto, Pamela finds herself smack dab in a 1919 boarding house. There she encounters building proprietor Charlie (Mark Lotito) and suffrage activists Maisie (Leanne Cabrera) and Grace (Lauriel Friedman). Unplanned pregnancy, abortion, and the early 20th-century feminist movement are introduced, giving Pamela a fleeting sense of historical grounding.

But just as quickly as insights dawn, they recede. Indeed, as Pamela is transported from 1919 to 1946, and then to 1978, she presents as a wide-eyed innocent, unmoored and randomly flung into each new reality. Nonetheless, as time passes, Pamela not only finds her one true love—a younger man named Chip (Ryan Avalos)—but secures the human connections that had eluded her in the 21st century. Along the way, Pamela is forced to learn numerous life lessons. Among the most salient is that each era is marked by cultural and political shifts as well as confounding changes in social expectations. This is hammered repeatedly, reminding the audience that the need to adapt is a constant.

If Tech Support rests on a preposterously thin premise, suspension of logic is possible when the writing is tight, inventive, and clever. Sadly, the script by Debra Whitfield (who also directed the piece) boasts none of these qualities, and is instead clichéd, predictable, and heavy-handed. In fact, despite the ensemble’s best efforts, the play is more likely to elicit groans than giggles. That said, Elliott Forrest’s projection design is terrific, as are Janice O’Donnell’s costume design and Natalie Taylor Hart’s scenic design.

This, however, is not enough, and while contemporary life is often marred by frustrating technological glitches, Tech Support does little to elucidate our struggles with errant machinery or the people who are meant to help us navigate this terrain.