This show has closed, but look for additional touring performances

Created and Performed by Sasha Velour
Produced by House of Velour 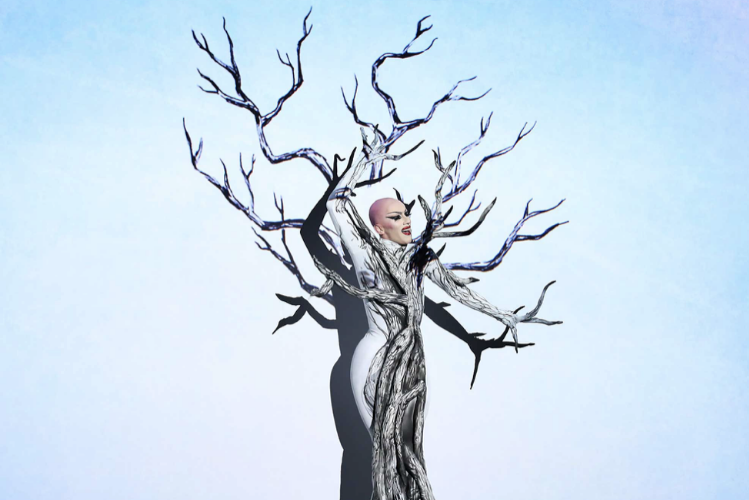 Sasha Velour in Smoke and Mirrors. Photo courtesy of ITD Events/House of Velour.

In an homage to (and proper re-mounting of) her own work from both her monthly drag show Nightgowns, and her performances on RuPaul's Drag Race, Sasha Velour proves that she deserves the fully produced production that is Smoke and Mirrors. Interspersing her lip syncs with video transitions and monologues, Velour provides exposition about herself as both a person and an artist. Playing with the nuances of theater, she blends together multiple inspirations in a multimedia tour de force placed inside a black box.

Velour speaks about her start in White River Junction, Vermont, where she first dipped into drag. But while in dingy bars she has had to create her own spotlight (or fight for the light with a mounted moose head—a classic tale), at New York Live Arts (and presumably everywhere else she tours Smoke and Mirrors) she has the lighting rig and projectors she’s been waiting for, and she uses it all magnificently. With just a large screen nestled amongst some soft goods, there is no superfluous set. Minor props and furniture come on and off, but anything beyond that is presented via projections.

Described as a series of illusions, there is no obvious through line between the numbers, but Smoke and Mirrors does show how Velour has grown throughout her public drag career. Judy Garland, Celine Dion, Whitney Houston, and (Velour’s favorite) Shirley Bessie are among those on the lip sync soundtrack. Velour pays homage to former versions of herself, as well as to Judy Garland and her mother (who famously inspired Sasha’s bald queen look after a lengthy battle with cancer). Velour even recreates the final drag piece she performed for her mother.

The first act is based around a red, sequined skin-tight body suit that is revealed during the second number, and then supplemented with new wigs, blazers, and collars. Her stilettos, like the timing of her quick changes, are always on point. As she pauses for costume changes, videos of the many Sasha Velour personas provide glimpses of characters you wish you could spend more time with. But it is during intermission where a full costume transformation occurs, reving up for the final "tree" look, where Sasha effectively turns herself into an actual work of art. She even notes the lack of encore—because there is nothing else she can do in that dress.

While Velour caters to her fans, Smoke and MIrrors is still enjoyable for those unfamiliar with her previous work. Whether “sawing herself in half” or lip-syncing to some of this century’s greatest pop hits, Velour evidences the humor and avant-garde aesthetic for which she is well-known. I was fortunate to see the performance on Trans Visibility day—where Sasha noted that several of the trans icons who have inspired her were in the audience. This sense of celebration ramped up the audience's fervor—as one would expect from a drag performance. But along with the hoots and hollers, snaps, and “yaaaas”’s, Velour also provides quieter moments to appreciate the theater happening in front of you. Smoke and Mirrors is a one-woman extravaganza that embraces the queer community and gives them one hell of a show.

(Smoke and Mirrors played at New York Live Arts, 219 West 19th Street, March 21-31, 2019. The running time was 90 minutes with an intermission. Performances were Thursdays through Saturdays at 7:30, as well as Tue 3/26 and Sun 3/31 at 7:30. For more information, including dates/locations for the North American and European tour, visit sashavelour.com.)

Smoke and Mirrors is created and performed by Sasha Velour. Directorial Advisor is Lillian Meredith. Video Production by House of Velour with Gina Garan. Animation by Geo Barnett and Julie Robert. Costumes by Diego Montoya. Wigs by Elle Emenopé.