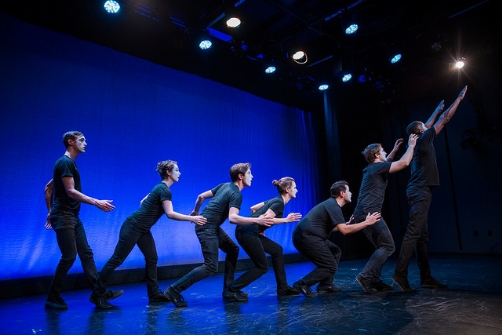 The BKBX ensemble in SKIN. Photo by Bjorn Bolinger.

BOTTOM LINE: Broken Box refreshes the French pantomime and serves up a delicious feast of physical storytelling in their latest show.

Many moons ago Broken Box (BKBX) Mime Theater did their first show at A.R.T./NY, titled See Reverse, which I stumbled upon more out of curiosity than a targeted interest in pantomime. And boy was I shook, not to mention thoroughly charmed by the company’s ability to recreate everything from a microscopic scale to a cosmic one. Seeing the BKBX logo on the A.R.T. programming board again, I’m all too thrilled to feast my eyes on another work by one of the most inventive and unique companies I’ve ever had the fortune to encounter.

SKIN, like See Reverse, is an evening of short narratives around the titular theme. It starts with a boy-band parody: remember all those corny dance moves? The recognition of something so iconic, and the enjoyment of the secret (?) guilty pleasure many of us share, leads to roaring laughter within the first two minutes of the program—well, I don’t think I’ve laughed as hard since the last time I saw those guys.

Immediately after, we are introduced to Planet Earth, one of the two series peppered throughout the evening. And this is one of my favorite things about physical theatre, in which the performers draw inspiration from nature to recreate something so simple yet achingly beautiful. Throughout this series, you get a magical array of imaginative recreation in scales, feathers, tentacles, exoskeletons, and more. You see the elegant stillness and satisfying movements of a lizard waiting for her prey, the joyous congregation of birds, and perhaps most fittingly, the process of skin being shed. Indeed, nothing is more satisfying to witness than the earnest awe with which artists imitate nature, and create something much more.

Another piece that receives several reprises throughout the evening is “Untitled,” in which a sculptor creates something from a bolder, destroys it, and creates something again. And this is one of my favorite moments in the show: when the artist starts to sketch her visions, the bolder (formed by several mimes) starts to transform into shapes of the artists’ imagination. It’s astonishing to see this process—that of an artist revealing the possibilities within something rough and seemingly impossible—so perfectly illustrated. And given this subject matter inherently suggests longevity, it enhances our experience to see different iterations of this piece throughout the program.

SKIN isn't a grab-bag of moments, but a well-curated lineup of pieces. Some are hilarious, some poignant, some will make you go “awwww,” and some will make you reconsider. And given their age-old art form, BKBX clearly makes a point to stay current and relevant. In "Escape," we see a Black Mirror-styled episode in a teenage boy’s life, with more twists than you’d expect in its plot—all in silence yet! With gestures and facial expressions alone, so much is delivered without words. It’s difficult to describe much more without giving away spoilers, which would be a shame—BKBX’s SKIN epitomizes what theatre strives to have: the element of surprise.