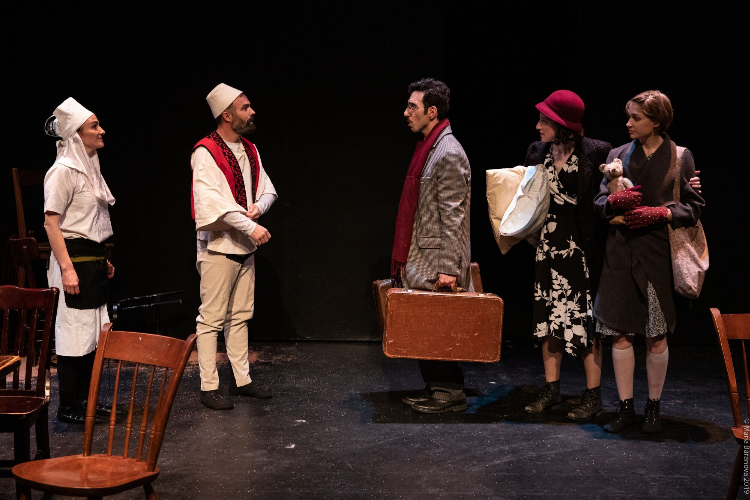 BOTTOM LINE: Two decades of Albanian history set against each other: the 1930s, where the country became the last refuge of many Jews, and the 1990s, in which the Kosovo war caused many to flee.

Albanians have an untranslatable word, “besa,” which encompasses faith, hospitality, family, pledging responsibility, and much more. Turned away by every other country in Europe and elsewhere, Jews fleeing the Nazis were able to enter Albania and live openly with Albanian families, who went to great lengths to provide for such guests. Sadly, the people who were so kind to victims of the Nazis were later targeted by Serbia, and many left Kosovo in several waves during the war in the 1990s. Backed by the lively trio Metropolitan Klezmer (featuring Ismail Butera, Debra Kreisberg and Eve Sicular), Refuge spans both of these disparate time periods, and includes evocative dance and movement on the themes of freedom and community.

In the 1930s, a Jewish family in Poland sees the violence in the streets and decides to emigrate. Miriam (Becca Schneider), her husband Yakov (Perri Yaniv) and their daughter Adah (Nancy McArthur) take their silver and jewels and cross into Czechoslovakia, Hungaria, and then Serbia Iooking for a place that will grant them visas. During the long, dangerous journey, through Sonya Plenefisch's set full of hanging chairs, Adah stops talking entirely. The Jewish family ultimately finds an illicit way into Albania where a friendly family—Bujar (Eshref Durmishi), his wife Zoja (Ilire Vinca), and their daughter Tana (Daniela Markaj)—takes them in. The Albanians give their Jewish guests forged papers, new clothes, and new identities. Adah (now “Drita”) dances gleefully with Tana while Yakov (now “Guri”) drinks raki with Bujar and Miriam (now “Bjesjka”) finally lets her guard down. As the war continues, Bujar and Zoja sell wedding rings to buy food for their guests and persuade Nazi patrols to drink raki ("schnapps") instead of capturing their guests. It would take the end of the war for Adah to start speaking again. A boat is leaving for Italy. Those who do not wish to be imprisoned by Communist partisans must get on it.

Interspersed with the World War II story, we see another escape. In the 1990s, an aged Tana, her son Alban, and his daughter Teuta flee Kosovo for the safe haven of Macedonia. And at key points throughout the play, we see a current-day reunion in New York, where Tana's granddaughter meets Adah's granddaughter. The former Communist regime did not believe in delivering mail, but the late Adah's unsent letters tell the story of the brave, defiant Albanians.

This is Blessed Unrest's third collaboration with Teatri ODA. They have chosen to adapt true stories that should be better known. Refuge plumbs the many nuances of the ancient custom of "besa." Guri leads a Passover celebration and asks if there is any matzah to eat (the same word in Albanian means "cat.") An Albanian family, threatened by an enemy soldier, refuses to identify which child is theirs, and which is the refugee. Sera Bourgeau's costumes instantly transform each actor into a traditional Albanian.

Refuge arrives just in time to remind us about the need to treat refugees with compassion. Jessica Burr and Florent Mehmeti help show how desperation and sadness can quickly change to relief. The Kosovar ensemble members Eshref Durmishi, Ilire Vinca, and Daniela Markaj bring a huge amount of energy to the production, and offer a rare opportunity to experience traditional Albanian songs and dances.