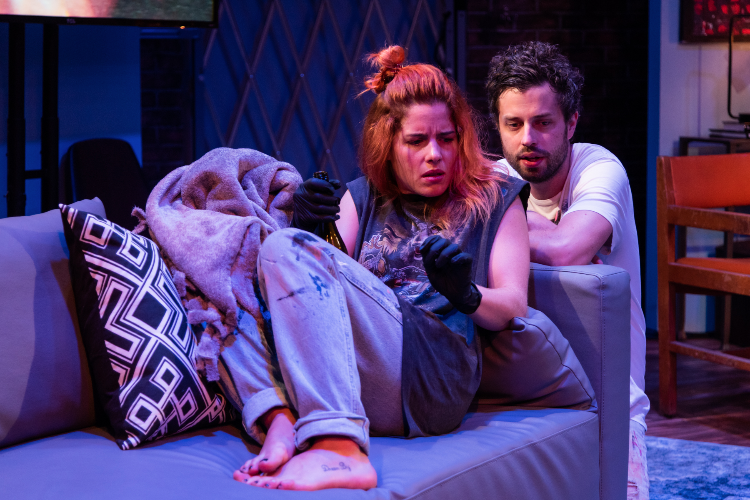 BOTTOM LINE: A creepy and compelling three-character play about loss and trauma.

An unresolved past is reawakened by a coping mechanism for dealing with loss in this quirky play by Zayd Dohrn. First produced in 2009 at the Summer Play Festival, this simple little three-hander originally featured Ally Sheedy, Katherine Waterston, and Greg Keller. This production, co-produced by Vancouver’s Reality Curve Theatre and the SoHo Playhouse, stars Emily Bett Rickards (otherwise known for her role on The CW’s Arrow), Paul Piaskowski (Reality Curve’s founder and artistic director), and Lori Triolo, who also directs the production.

Kelly (Rickards) is an artist who makes dolls for people who have suffered the death of an infant. With a photograph as her guide, she immortalizes their deceased babies using plastic. When Emily (Lori Triolo), one of her customers, is especially finicky about the details of her baby doll, Kelly suffers a mental breakdown and reexamines a trauma from her own infancy. Dohrn’s premise is fascinating and fresh. One wonders if this play was inspired by a real doll-maker who found a niche in serving bereaved parents of deceased infants. Imagining that there’s an artist out there who makes her living this way makes the play more intriguing.

Arrow fans will particularly enjoy seeing Rickards onstage. Her performance is incredibly captivating—she’s skillful at holding her cards close to her chest, forcing you to lean forward to learn what she's really about. Rickards has tremendous chemistry with Paul Piaskowski, who plays Kelly's boyfriend Daizy. Piaskowski does an excellent job endowing his girlfriend with love and concern, which only makes us care for her more. Directing the piece does not take anything away from Lori Triolo’s performance as the demanding client. Triolo knows how to be equal parts annoying and deserving of sympathy, which is not an easy balance to strike.

If there is one aspect that left me less than enthralled, it's the show’s tone. The piece is described as a dark comedy, and while Dohrn peppers his script with witty one-liners, they are not delivered to encourage hilarity. The play has also been described as a thriller, but there is only one distinct moment designed to startle. It definitely succeeds—I felt my heart take a dive into my intestines—but it's the only isolated moment of its kind, so it feels out of place. Ultimately, this production struggles to maintain a consistent genre. To me it seems most successful as an emotional drama, much more so than a thriller or dark comedy.

This may be the result of having the director also acting on stage. While Triolo could clearly guide scenes between Rickards and Piaskowski, I wondered who kept an eye on her lengthy scenes with Rickards. Perhaps Piaskowski put on his artistic director hat for those moments? I’m speculating, of course, but the tone of the piece fluctuates, and as a result the desired effect is obscured.

Be that as it may, the show is intriguing enough, and Dohrn’s script still feels fresh ten years later. If you like Arrow, you’ll particularly enjoy Rickards' performance, and if you’ve never seen it, you’ll be intrigued by a new actor who I’m sure you’ll want to see more of in the future.

(Reborning plays at the SoHo Playhouse, 15 Vandam Street, through August 3, 2019. The running time is 80 minutes with no intermission. Performances are Tuesdays through Saturdays at 8; Sundays at 7. There is also a performance Sat 7/27 at 2. Tickets are $49 and are available at reborningoffbroadway.com.)