By Beau Han Bridge; Directed by
Part of the 2019 FRIGID New York Festival 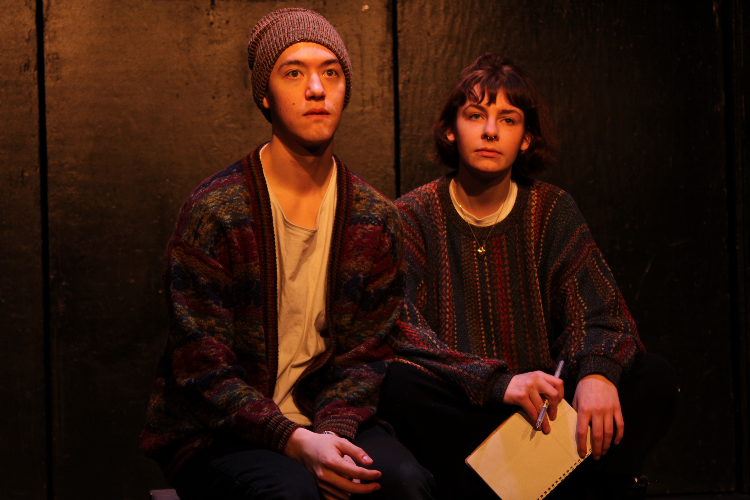 Though ideals may shape our lives and fuel our aspirations, can they really speak to our individual experience? According to Sephy (Shelby Satterthwaite), the young protagonist of Persephone’s Cave, our faith in such archetypes is hollow: no story can have universal relevance, and our heroes are just projections of our own fears and longings. Nonetheless, it is this same yearning for truth that drives Sephy to reject society and seek her own narrative, and it's these same questions that Persephone’s Cave explores.

Disconnected from her family and disenchanted with the outside world, aspiring filmmaker Sephy has locked herself in an old movie theatre with her boyfriend Hayden (playwright Beau Han Bridge). Convinced this isolation will fuel their creativity—and that their bond will be enough to sustain them—Sephy and Hayden pass the time watching classic films, debating philosophy, and devising scripts and poetry about their lives. As the initial thrill of their decision fades, leaving the pair alone with their thoughts and each other, it becomes clear that their relationship is as fragile and illusory as the world they seek to build.

A directionless poet, Hayden craves freedom but relies on Sephy for inspiration and guidance. Likewise, Sephy’s philosophical musings and creative ambitions cannot mask her dependence on Hayden and deep-seated fear that their relationship will never fulfill her. Caught between fractured memories and inexplicable longing, Sephy and Hayden must choose whether to stay in their familiar-but-stifling “cave” or venture outward toward risk and rebirth.

In its existential inquiries, codependent characters, and no-man’s-land setting, Persephone’s Cave calls to mind Beckett’s Waiting for Godot or Sartre’s No Exit, but lacks the dramatic tension of its predecessors. Its characters’ turmoil illustrates the notion that our inner worlds alone cannot sustain us, but their solipsistic monologues read as more Millennial cliche than everyman’s dilemma. Apart from its characters’ names, ill-starred love, and the bleak “underworld” they inhabit, the play’s references to the myth of Hades and Persephone seem loose; a more fitting classical prototype might be Plato’s “Allegory of the Cave,” in its depiction of the limits of human perspective, subjectivity of the realities we inhabit, and capacity to self-deceive. While the script’s concepts are intellectually intriguing, they don’t always translate well onstage, and a bit more character development would give Persephone’s Cave the light and air it deserves.

The cast is Beau Han Bridge and Shelby Satterthwaite.