By Cole Porter, Herbert Fields, and B. G. DeSylva; Directed by Michael Montel
Produced by the York Theatre 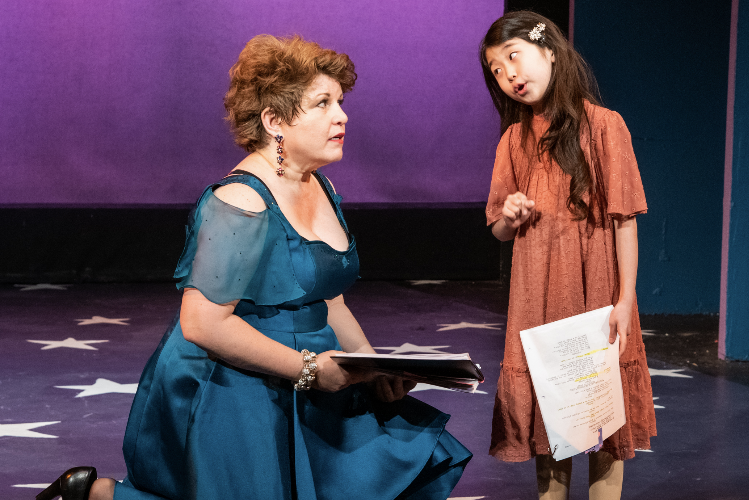 BOTTOM LINE: Panama Hattie is a fairly pleasant portal to the past with a very young co-star offering a window into a bright future.

The spirit of Ethel Merman—fearsome vibrato and wise-cracking wit intact—is alive and well at the York Theatre where Panama Hattie, Merman’s 1940 Cole Porter hit, is currently appearing in concert version form. And while Klea Blackhurt takes on Hattie Maloney (the Merman role), with gusto and goodwill, it’s not her performance that most recalls Merman’s ferocious energy.

No, that honor goes instead into Kylie Kuioka, the 9-year-old stick of dynamite who plays Geraldine, Hattie’s fiery step-daughter-to-be. Kuioka sings thrillingly with Blackhurst on “Let’s Be Buddies” and lathers her takedowns of Hattie’s outfits with delightful snark. It also doesn’t hurt that in this show, part of the York’s Musicals in Mufti series, performed on-book with limited rehearsal, Kuoika knows her lines, lyrics, and blocking cold.

More-so than Fifty Million Frenchmen, the musical that opened the York’s three-show Porter cycle in early October, Panama Hattie’s production, directed by Michael Montel, feels rather rough around the edges. It’s too bad there’s no full recording of this charming Porter score available to consult post-show since there was a fair bit of stumbling over lyrics at the early performance I attended. Still, Panama Hattie is a much better musical tale than Fifty Million Frenchmen and the performers infuse the show with vigor and vim, if not subtle acting. (Might the Mufti series not serve the shows better by setting up them up at music stands in true concert form, focusing on the score and characterization, instead of offering a slapdash semi-staging?)

Hattie Maloney, the toast of a Panama nightclub, is about to tie the knot with Nick Bullett (Stephen Bogardus), whose daughter Geraldine is finally coming from Pennsylvania to live with him. Hattie’s always wanted a kid, but will she be able to quell her ego and alcoholism in time to win little Geraldine’s heart? That may not sound like much of a story, but Nick is one of the guys in charge of the controls at the Panama Canal, and there’s a terrorist plot in town to blow it up.

There’s also, fortunately, Porter’s gem-laced score, featuring a slew of hits written for Merman—“My Mother Would Love You,” “I’ve Still Got My Health,” “I’m Throwing A Ball Tonight,” and “Make It Another Old-Fashioned, Please.” Blackhurst delivers that last one with special clarity and heartache; she’s been performing it for years in Merman tribute shows (out of which she’s built a cabaret career) and, when she puts down her script and looks directly at the audience, she offers moving, nuanced subtext in spades.

Standouts from the hearty ensemble include Anita Welch as Florrie, a young chanteuse who falls hard for Geraldine’s aged British butler, and Casey Shuler as the wicked heiress scheming to destroy Hattie’s happiness. And if the book by Herbert Fields and B.G. DeSylva doesn’t transcend punny silliness—“Oh, the fertility of it all!” the butler exclaims when Florrie suggests they’ll have twenty children together—it’s only for lack of trying.