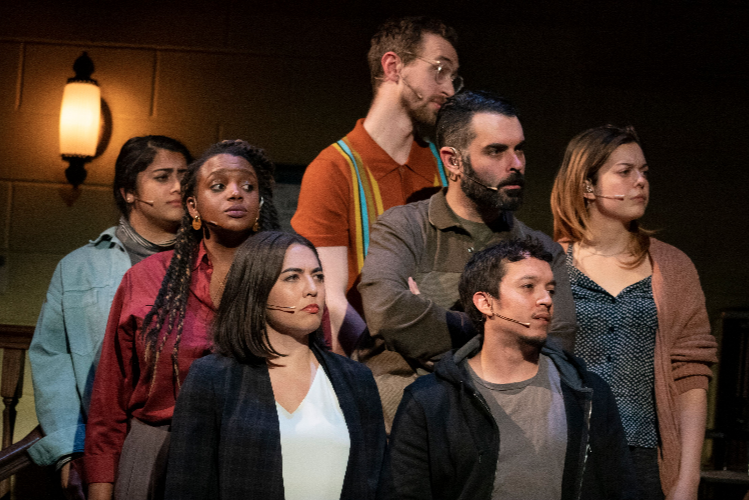 The cast of Octet. Photo by Joan Marcus.

BOTTOM LINE: An a capella musical about internet addiction where the music far surpasses the story.

With Octet, another a capella musical has surfaced since the excellent In Transit played Broadway back in 2016. Does this mean a capella musicals are becoming a trend? I certainly hope so, especially when they're as beautifully composed and arranged as this one is by the talented Dave Molloy, who also wrote the book and lyrics. The sounds and harmonies that Molloy dreams up are inventive and delicious—not unlike a visionary chef who combines flavors that don’t obviously belong together—the result is a feast for the ear.

As an evening of choral music, Octet is a winner. It is telling, however, that the title refers to the choral ensemble featured in the show and has nothing to do with the story or premise. At the center of Octet is a support group for technology addicts. Eight characters have been invited here by a Godot-like figure named Saul—who is never revealed or even defined—to share their struggles with addiction to social media, video games, and chat rooms. They each deliver their trials and tribulations in song, supported by the other seven performers singing backup. These testimonies are interspersed with communal hymns and rituals that give the proceedings a sense of custom and procedure.

Musical Director Or Matias turns these eight singers into a wonderful chamber choir and their voices strike a perfect blend. Every member of this octet is excellent, including, and perhaps most notably, In Transit’s Margo Seibert, who returns once again to show off her a capella prowess. Lighting designer Christopher Bowser makes the show infinitely more stage worthy by theatricalizing the characters’ journeys in cyberspace. His design invites us to disconnect from the physical realm and enter a digital reality made up of blinking color and darkness interrupted by flashes of light. Bowser’s brilliant physicalization of the interwebs frees up director Anne Tippe to abandon the physical limitations of the support group conceit and create a more imaginative environment.

But design elements notwithstanding, Octet is driven by its music, not story. The characters’ problems lack urgency and therefore fail to enlist either our concern or empathy. An early number asks us to laugh at the ridiculousness of being hopelessly devoted to a video game. It’s worth a momentary chuckle, but ultimately too frivolous to carry an entire musical number. When the show’s innocuous tonal approach stops bearing fruit, the evening takes an oddly dark, existential turn invoking the existence of god. Octet is not sure if it wants to be a lighthearted send up of internet addicts, or a deep, existential comment about the human condition. I remain unconvinced of Molloy’s connection to the topic of internet addiction. Rather, it seems his main goal was to write an a capella musical, and the fact that it ended up being about internet addiction feels inconsequential.

Anyone who delights in a cappella music will appreciate Molloy’s gorgeous score and delightful harmonies. But if what drives you to the theatre is a compelling story and character development, you might come up a bit short here. Not unlike in his Broadway offering, Natasha, Pierre & The Great Comet of 1812, the music is a great deal more compelling than the narrative. If only he could find the Hammerstein to his Rodgers, there would be no limit to what he could achieve.