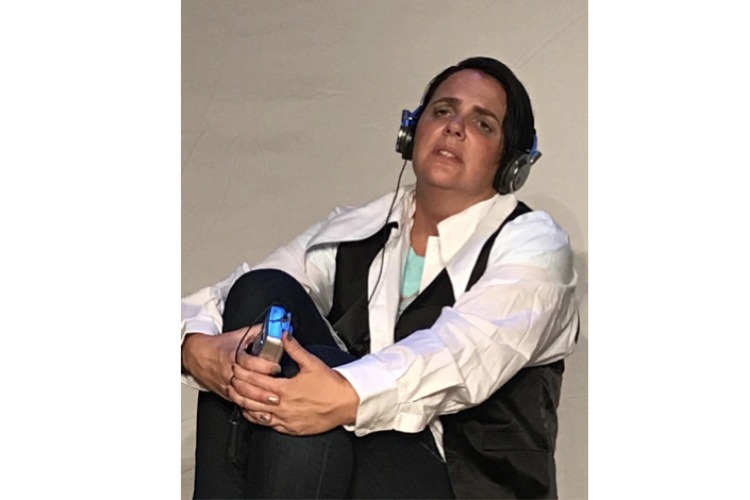 BOTTOM LINE: David Bowie's career of artistic risk-taking can teach us a lot about living our best lives. Mary Monahan tells the acclaimed story of what Bowie meant to her.

Mary Monahan’s Moonage Daydream returns for a best-of performance at United Solo. The show is from 2016, the year David Bowie died. Covering the time between the day in 1983 when Mary’s family got cable and she first experienced Bowie’s videos on MTV, and the day a grown-up Mary ran into the legendary performer on the streets of New York, Moonage Daydream shows what it’s like to have a hero. Bowie himself appears onscreen in various interviews, humbly relating the message that having the courage to take risks makes life worth living.

How amazing is it to discover David Bowie? The man changed personas for each new album. Mary finds him to be a tremendous inspiration. Those who remember the 1980s will surely relate to her grand production of putting on makeup to attend her first Bowie show in Philadelphia in 1986. Unfortunately, while she and her friend are buying cheese steaks, two unruly punks steal their tickets and they are left to soak up Bowie’s reverberations from outside the stadium.

There does seem to be a Bowie song for every mood and every big life decision. Ironically, Mary, who finds the small group of people in her Penn State acting program to be superficial, enters a loving relationship with someone who was really much deeper than she had imagined. This young man was able to guess her favorite Bowie song, thanks to his steady observation. The two fall in love, but he cannot move to New York with her. That, as Bowie might say, is too risky.

Mary Monahan bravely comes to United Solo to be herself, joyfully acknowledging the great variety of lessons we can learn from David Bowie. Joan Kane’s direction teases out the great excitement and uncertainty that haunt our most unforgettable memories. Jacob Subotonick's sound design practically brings Bowie into the play as a character. Coco’s hair design and Cat Fisher's costumes gives Mary the edginess (with a little bit of androgyny) that makes her resemble her hero even more. Bruce A! Kraemer’s lighting adds the excitement of concerts and performances big and small.