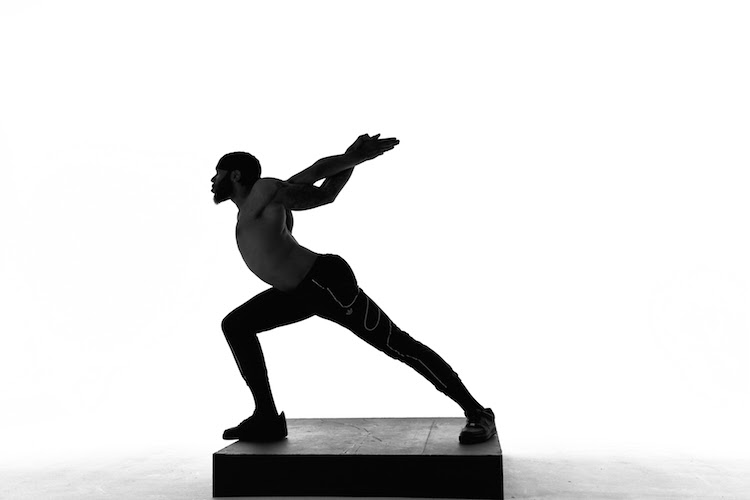 BOTTOM LINE: With choreography as unique to New York as its dancers, Maze thoughtfully dissects the dead ends presented by modern American culture and its accompanying systemic racism.

The environment starts out shrouded with mist, sliced and diced by white perpendicular crosses crisply marking the floor of what would otherwise be an ordinary, if large, black box. The dancers enter slowly, a few lone bodies harshly backlit against this mist; their seemingly liquified movement only imposes the shadow of a black body against the stark white. As the drumming of Taiko Masala Inc. softens into the electronic stylings of DJ Epic B, the dancers gradually begin to look like any number of people you might pass on a New York block—decked out in full Nike athleisure ensembles to boot. During an hour of soulfully crafted dance theatre by co-directors Reggie “Regg Roc” Gray and Kaneza Schaal, the cast of dancers ethereally float through the Black American experience, applying the medium of Flexn. What is Flexn? A form of street dance created in Brooklyn with roots in Jamaican bruk up—and it’s more familiar to New York audiences than one might think.

The lighting design by Tobias G. Rylander is enough of a reason to see Maze all by itself. That’s no surprise, given his past work with groups like The XX, The 1975, FKA Twigs, and others. Rylander demonstrates the great impact light can have on an entire performance experience, as opposed to simply lighting the dancers and making sure everyone looks nice. With his bold creative choices, Maze is elevated from just another bleeding-heart dance piece to a full on environmental experience.

The success of the piece is also due to the subtle craft of its cast. Performers manipulate each other and the space with their moves, which at times seem totally improvised (which will evoke memories of studying Viewpoints in former theatre students). Especially with the style of Flexn applied, body contortion is a natural artistic choice that takes on a larger meaning when contextualized by themes of injustice. The dancers bend and twist their arms, pretzeling them behind their skulls. While this is typical of  Flexn style, when coupled with Maze's poetry and creaky, scratching percussion, it becomes a concise statement on the chains that will not fade from our history.

The downside of Maze's immersive staging comes not from sharing the space with actors; it's from sharing the space with other audience members. The theatre doesn't ask patrons to silence their cell phones, or even to put them away. In fact, the opposite is encouraged. While it's a fun novelty at first to take a picture of the misty space upon entering, to a considerate theatre patron, something feels inherently wrong about photographing or recording performers during a show. However, bolder audience members had their phones out for the duration of the performance. There were times when I’d find myself being pushed out of the way by audience members streaming a live story on Instagram. Hopefully this wasn't done for any sinister immersive-dance-bootlegging market.

Maze highlights the nightmarish racist infrastructure of our country through excellent manipulation of space, body, light, and sound. Intriguingly enough, in these abstractions, modern America is immediately contextualized. We are shown so many injustices through pantomime and stylized violence; so many patterns in societal failures and systemic racism are here made obvious through dance. Kenita Miller Hicks on vocals continuously whispers, "I've seen this before." It’s all evocative of our present, our environment, our prejudices. Which poses a few key questions: if it’s so plain to see, why can’t we find the golden light at the end of the tunnel? Why do we continuously create dead ends for social groups? We must learn to navigate the maze.