Lost My Train of Thought /
Whiskey Flicks Live! The King of New York 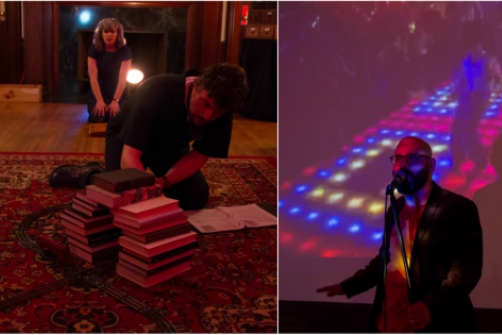 Sarah Murphy (back) and Justin Steeve in Lost My Train of Thought;
Michael Niederman in Whiskey Flicks Live! The King of New York. Photos by Jody Christopherson.

Following its inaugural launch in January 2019, the So-Fi Festival returns to New York this summer with a new collection of low-fi, high-concept solo shows. True to its predecessor, the festival’s lineup continues to test the boundaries of its chosen art form, incorporating such elements as toy theatre, music, film, and improvised performance to create unique cross-genre story experiences. With distinctive trappings and a shared interactive throughline, Tiny Box Theatre’s Lost My Train of Thought and Michael Niederman’s Whiskey Flicks Live! The King of New York stand out as two such examples of So-Fi’s diversity and innovation.

In a clever mix of object work and group collaboration, Tiny Box Theater’s Lost My Train of Thought leads audiences through the shifting worlds of time and memory. When her vacation is interrupted by the discovery of a mysterious book, an inquisitive librarian (Sarah Murphy) must piece together its author’s requests from a series of strange clues, antique objects, and fractured personal recollections. With viewers bordering the playing space in an intimate three-quarter arrangement, an omniscient voiceover (voice of Justin Steeve) and two facilitators (Steeve and director Joy Tomasko) fold us into the action through a series of verbal and written instructions. As audience members are guided to answer the librarian’s scripted questions, manipulate objects onstage, or shape the plot through choose-your-own-adventure-style prompts, we become both witnesses to and agents of its free-associative storyline.

As befitting a show centered on our efforts to categorize and understand the past, Lost My Train of Thought reveals itself through a series of antique curiosities. Arranged in old card catalogue drawers and passed through the audience, dollhouse miniatures form intricate dioramas of the settings we encounter. Performers map the the heroine’s inner and outer travels with a wind-up miniature train and railroad track, choose new storylines by rolling dice or reading from vintage postcards, and view scenery through the projections of Radioptican “Magic Lantern” toys. Despite the show’s built-in reliance on chance, participation, and specialized objects, Tiny Box’s artists direct its transitions with striking efficiency, keeping onstage action and audience focus consistent throughout the brisk forty-five minute run. Like the act of recollection itself, the show’s experience is as communal as it is personal, a shared effort to give meaning and context to that which we encounter.

By turns irreverent, celebratory, and poignant, Niederman’s off-the-cuff responses focus on the cultural conception of New York and his own tumultuous relationship with the city. Selections from such films as The Warriors, After Hours, and Spike Lee’s Crooklyn evoke rants on the city’s ever-changing social, infrastructural, and cultural dynamics, as well as a longing for the mythic, gritty beauty they depict. Iconic scenes take a darker turn through Niederman’s self-aware lens: a famous clip from Manhattan comes tinged with the hindsight of Woody Allen’s sexual misconduct, while discussion of Precious’s inner-city characters leads to Niederman’s admission of his own bias as an educator and inability to handle marginalized students’ dilemmas. Likewise, lively sing-alongs to New York-centered movie musicals including Mel Brooks’ The Producers and Fosse biopic All That Jazz speak to a shared pride for the city and a bittersweet knowledge of its, and our, transience. (In one standout sequence, Niederman rouses us to a whiskey-fueled chorus of  Company’s “Here’s To The Ladies Who Lunch,” as sung by recently departed Broadway legend Elaine Stritch). Deceptively simple in concept, Whiskey Flicks demands in execution remarkable levels of truth and presence, and Niederman rises to the task. Though improvised performance always carries risk, the show’s fluidity keeps it topical and intimate: as its creators share whiskey, popcorn, and banter with us, there’s a sense of camaraderie, a joint love for the city and acknowledgement of its, and our, contradictions.

Unique in their formats and subject matter, Lost My Train of Thought and Whiskey Flicks Live! crack open the storytellers’ art through varying forms of audience involvement. In doing so, each show simultaneously challenges our conception of live performance and hearkens back to the genre’s fundamental roots. By allowing us to shape and inhabit the fictions they create, the festival’s artists tap into theatre’s potential as a collective experience and shared dream.

Lost My Train of Thought is written and directed by Joy Tomasko. Designed by and presented in association with Tiny Box Theater. Train Consultant is Mark Lamparski. Lighting/Projection Consultant is John Eckert. Poster Design by Aaron C. Smith. The cast is Sarah Murphy, with appearances and voiceover by Justin Steeve and Joy Tomasko.