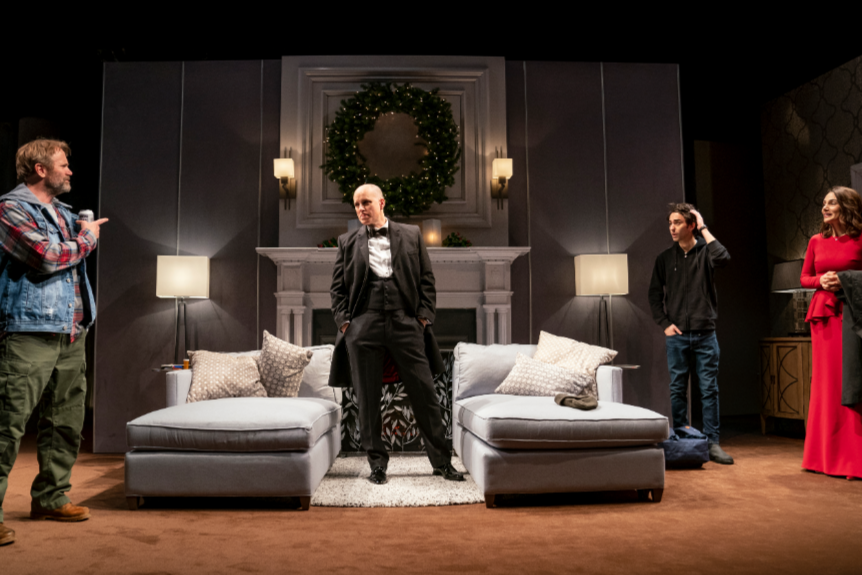 It’s the holidays and black sheep Billy (Lee Tergesen) surprises his younger brother David (Kelly AuCoin) at his office. Billy is a “former” drug user who’s “pretty much clean and sober”—minus the beer and weed. Billy hasn’t seen his brother’s family since their parents’ funeral, when David’s now college-age son Jeremy (Alex Wolff), was 9. And from the start, there’s obvious tension between the two. The backstory—their parents were killed in a house fire and Billy, who was home, was blamed. Billy went to jail and was later “banished.” And clearly the past is still present in everyone's mind. Billy to David: “You filled out. Too many hot lunches?” David’s retort: “I do look older. You put us through a lot.”

Now Billy needs a place to stay for the holidays for a reason that David ultimately can't say no to. Both charming and malevolent, Billy immediately creates chaos at David’s home. He’s there to greet Jeremy when he returns from college, manipulating the reluctant teen into joining him in smoking weed, telling him David used to be a big pot smoker. But Billy also has some genuine affection for Jeremy, offering him dating advice and reminiscing about some lighter times in their shared past. When Molly and David arrive, things only get more tense. Molly believes Billy is lying about his reasons for his visit, and starts arguing with her husband. As the two brothers tell truths, they too begin to fight. After further escalations and revelations, the ensuing destruction reverberates and ricochets in Billy's wake long after he finally leaves.

The show is well cast. AuCoin makes David’s anger and sadness deeply felt. Molly is given short shrift, but Parisse's portrayal adds some warmth to the testosterone-strewn battlefield. Wolff provides much-needed lightness and a little comedic relief. And Tergesen is fun to watch as he needles and menaces, giving Billy a trace of vulnerability and likeability. John Lee Beatty’s rotating set design looks great, taking the audience from David’s Wall Street office to the family’s spacious, well-appointed apartment. And Daniel Sullivan’s brisk staging keeps pace with Donald Margulies’s sharp-edged dialogue. But the story otherwise lacks spark, not saying anything sufficiently compelling about the modern family drama.