By Marni Freedman and Phil Johnson; Directed by David Ellenstein
Produced by The Roustabouts Theatre 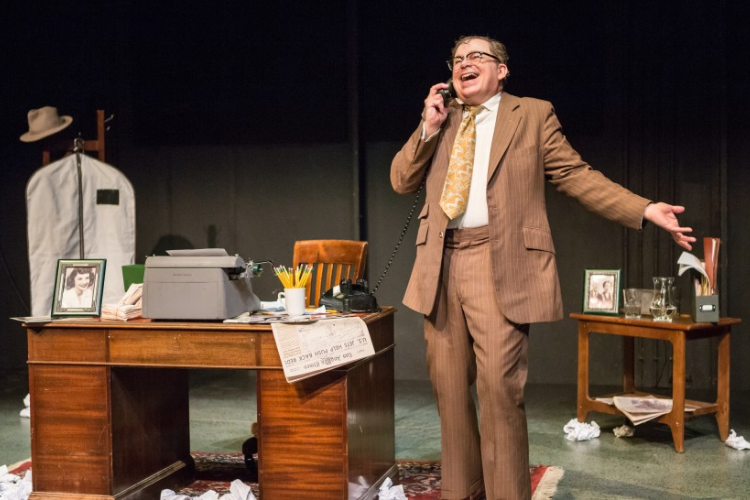 Phil Johnson in A Jewish Joke. Photo by Eric Woolsey.

BOTTOM LINE: A look at the ethical dilemmas facing a Los Angeles scriptwriter during the Red Scare—leavened with lots of Borscht Belt schtick.

Hollywood screenwriter Bernie Lutz (a frenetic and constantly pacing Phil Johnson) thought he was going to have a great day. A movie he wrote with his partner Morris is about to open and the pair have been commissioned to pen routines for the Marx Brothers and actor Danny Kaye. But as all too often happens, once derailed, even the best laid plans will fall by the wayside.

On this particular day, Bernie is alone in his office. The floor is covered in crumbled papers, presumably drafts of sketches that have failed to pass muster, and the typewriter is gathering dust. Bernie is obviously agitated, worried because Morris has not yet shown up for work and the pair only have until day’s end to respond to a letter from MGM management asking them to prove their patriotism. It’s 1950’s Hollywood, and as Bernie reports, everyone is scared.

Jimmy-the Nice-Guy has already been fired for passing out pro-communist leaflets, and he is far from the only victim of McCarthy's witch hunt.  “This room is a comedy sanctuary,” Bernie tells the audience. He then confides that he has spent his life trying to turn himself “into a pretzel,” and has always tried to give the bosses what they want. For him, this has meant keeping his “nose to the ground” and avoiding political entanglements.

As Bernie speaks, he is constantly interrupted by phone calls. First, it’s Danny Kaye’s office cancelling their collaboration. Then it’s the Marx Brothers. As the calls come in, Bernie learns that he and Morris have been named in Red Channels, The Report of Communist Influence in Radio and Television, first published in June 1950. This means that their careers are essentially over—that is, unless Bernie gives a tell-all interview to an FBI agent about Morris’s well-documented activities as a Communist Party bigwig.

Not surprisingly, this forces Bernie to question whether his loyalty should rest with Morris or with the U.S. government. A muddle of thoughts fill his head: on one hand, he and Morris have been friends since they were 13 years old. Does this mean he has to stick by him no matter what? On the other hand, if Bernie loses his job, he’ll lose his home to foreclosure and likely find it impossible to work in the TV or movie industry for the foreseeable future.

It’s a sound set-up for drama, but A Jewish Joke fails to deliver. First, there is nothing particularly Jewish about the political landscape it evinces. Yes, six of the Hollywood Ten were Jews, but the Red Scare had less to do with anti-Semitism than it had to do with conjuring a particular brand of lock-step, flag-waving conformity. In addition, Bernie punctuates the play with a raft of Borscht-Belt-era jokes—many of them outrageously sexist and seriously unfunny by 2019 standards.

It's a pity. Despite excellent staging by David Ellenstein and an evocative set design by Michael Joseph Ormond, this hackneyed production adds little to what we already know about Joseph McCarthy’s campaign to rid the U.S. of the "Red Menace." Worse, it does nothing to help viewers connect the dots to contemporary political concerns.