This show is now closed.

Is This A Room: Reality Winner Verbatim Transcription

Concept and Direction by Tina Satter
Produced by Half Straddle 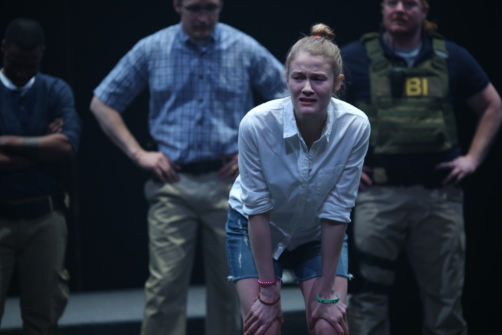 Emily Davis and company in Is This a Room.

BOTTOM LINE: What isn't said in this verbatim transcript of a play has the most weight.

Is This A Room only gives you a program as you exit the theatre. We have a sense of what we’re here for from the title and marketing, and news junkies are even more tuned in. But after the audience has experienced a verbatim, sometimes banal, direct transcript of an FBI interview of the improbably named Reality Winner, redactions intact, we discover the true meaning of what we’ve seen before us: Winner was one of the first to expose insider info about Russia’s 2016 election interference.

That’s never explicitly mentioned in the exactly 67 minutes traffic of the stage. Maybe it’s redacted in the official transcript. Maybe it’s between the lines of the mundane but weighted conversations of Special Agents Justin G. Garrick (Pete Simpson) and R. Wallace Taylor (TL Thompson) with the brilliant Emily Davis as Reality Winner. But we know now, after countless headlines and continued denials, just what Winner had stumbled upon. Winner is revealed here as someone with more interest in putting away her groceries and increased concern about her pet dog and cat as the narrative advances. We discover that Winner is questioned in a room she hates and forced to reveal in a clumsy way the many contrived details of her whistleblowing, far from the mastermind plans of other notables like Edward Snowden. It seems she just wanted Fox News to stop playing at her place of work, the NSA.

Tina Satter pitches this bizarre concept and maintains pauses and overlaps of what I assume is the original transcript in order to look toward intention. Parker Lutz’s set is obtuse and gestural to match the text. Sanae Yamada’s score and Thomas Dunn’s lights weave an intentional and imposing story of silences.

I left feeling tremendous empathy for Winner but also understanding the Special Agents' inane task. Becca Blackwell’s appearance as the “Unknown Male” is a kind of comic relief as the agents attempt to figure out what the hell to do with this average person who just wanted the world to know of impending doom. The Kitchen and Half Straddle may have more in mind for Is This A Room as the headlines develop. For now, they leave us with reminders of impending emergency as we’re left to deal with the aftermath.

(Is This A Room: Reality Winner Verbatim Transcription played at the Kitchen, 512 West 19th Street, January 4-13, 2019. The running time was 67 minutes. Tickets were $25. For more information visit thekitchen.org.)