Hercules: In Search of A Hero 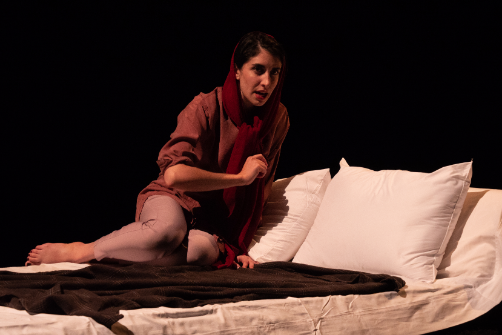 Helena Farhi in Hercules: In Search of A Hero. Photo by Selim Cayligil.

BOTTOM LINE: A modernized version of the myth of Alcestis as well as Hercules.

This isn’t the first show I've seen that’s been adapted from Euripides’ Alcestis. A little more than a year ago I reviewed Adjusted Realists’ The Briefly Dead, which put the mythological romance into a modern context and did a good job of fleshing out the characters’ emotional journeys. So when I spotted Hercules: In Search of a Hero, I was excited to see a different take on unpacking this ancient tale. Unfortunately, this attempt was less successful.

To recap the story, Admetos makes a deal with the gods, which grants him a free pass from Death as long as someone takes his place when the time comes. Yet when Death arrives to claim a soul, nobody is willing to die for the guy—except his wife, the famously beautiful and noble Alcestis. It just so happens that Admetos’s BFF is Hercules, the greatest hero of them all, who journeys to Hades and retrieves Alcestis from Death himself.

The biggest let down is that this Hercules: In Search of A Hero is stylistically confusing. Some of the characters seem straight out of farce—like Hercules, who is depicted here as a hyper-masculine clown, abrasive and violent. Yet other characters operate in a more naturalistic style. The performances are at times satirical, yet many of the design and acting choices are halfway between realism and over the top.

The production stages the story of the myth, along with what would seem to be commentary on the matter, but there never seems to be an accompanying shift in tone or perspective. Furthermore, the climactic moments tend to become melodramatic, accompanied by video projections. Ultimately, I found it difficult to decipher whether Hercules: In Search of a Hero is supposed to be a comedic retelling of the Alcestis myth or a commentary on the women’s role in that myth. If it’s the latter (not an unreasonable supposition, judging by the show's press materials), the production seems to have missed the opportunity entirely.

In Hercules: In Search of A Hero, when Alcestis is brought back from the dead, she is silent and objectified. As the two men interact, she gravitates towards the mirror and her own reflection, and seems to have lost all agency. The unnecessarily extensive depiction of misogyny is cringe-worthy. This is not to say that male-centric narratives should be banned from the stage—it’s certainly important to illustrate what’s wrong in order to move towards correction. However, the tone of this piece is misleading.

The only nuanced moment comes when Helena Farhi embodies a female character who transcends time: she becomes both Hercules’ wife Megara, who tells us about the horror of her husband murdering her children, and a modern day mother telling her child the story of Hercules’ labors. In doing so, Farhi also reminded me of a soldier’s wife, whose children ask about the heroism of their father.

This moment alone, along with the title, makes it seem that Hercules: In Search of a Hero is trying to focus on the tragedy that befalls Hercules, the heroic figure overtaken by mania who ultimately slaughters his own family. Everything about this narrative leads me to believe that this production has the potential to be about PTSD. The thirteen labors of Hercules, followed by his sudden downfall, is a beautifully tragic parallel to the many real life heroes who have journeyed through hell and back, but can no longer integrate into society. And yet, if there were any potential messages to draw from this story, they are obscured by the conflicting characterizations. Though well-intended and ambitious, Hercules: In Search of A Hero does not successfully deliver what it means to.

(Hercules: In Search of A Hero plays at Abrons Arts Center, 466 Grand Street, through February 10, 2019. The running time is 2 hours with an intermission. Performances are Thursdays through Saturdays at 7:30 and Sundays at 2:30. Tickets are $25 and $20 (students and seniors) and are available at AbronsArtsCenter.org or by calling 212-598-0400. For more information visit egtny.com.)

Hercules: In Search of A Hero is based on Hercules and Alcestis by Euripides. Direction and Concept by Ioanna Katsarou. Translated by Demetri Bonaros. Music Composition by Costas Baltazanis. Set Design by Christos Alexandridis. Lighting Design by Christina Watanabe, Costume Design by Marina Gkoumla. Video Design by Alex Agisilaou. Dramaturge is Ioanna Katsarou, Production Stage Manager is Anastasia Thanasoula.