By Moira Buffini; Directed by Indhu Rubasingham
Produced by Round House Theatre 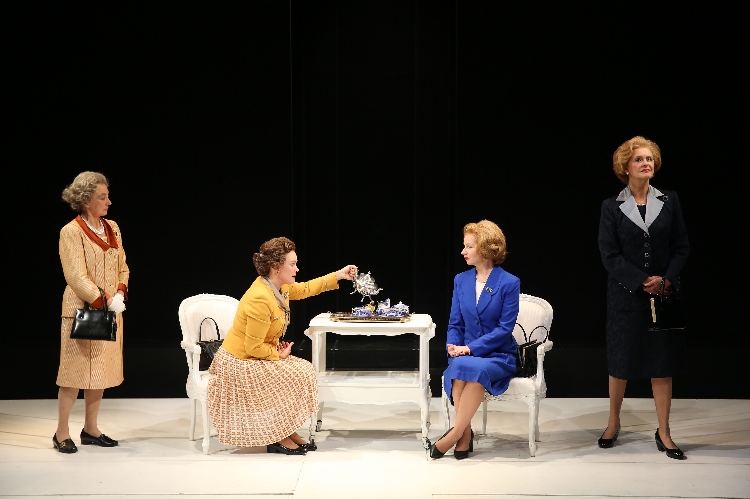 In Handbagged, the cotton glove challenges the iron fist. Moira Buffini’s buoyant and astute political comedy posits what might have happened during Queen Elizabeth’s private audiences with Prime Minister Margaret Thatcher. The Queen, replete with crisp cotton gloves and smart handbag, is a force for tolerance and compassion. At key moments, she drops her veneer of prim impartiality to send strong hints of liberalism Thatcher’s way, causing the Prime Minister to intone “Is the Queen a Socialist?” Meanwhile, Thatcher (infamously nicknamed “The Iron Lady”) resolutely champions the self while dismantling Britain’s industries, working class, and social programs.

In showing Thatcher’s steely determination, Buffini does not shy away from critiquing Thatcher’s policies, yet she creates an empathetic portrait of a woman who did not seem to have much empathy herself. These characterizations are framed within a playful theatricality that rejects the conventions of realism. The Queen and Thatcher are represented by both their younger (Beth Hylton and Susan Lynskey) and older (Anita Carey and Kate Fahy) selves, who argue with each other and present conflicting versions of history. Two male actors (Cody Leroy Wilson and John Lescault) portray everyone else, from palace footmen to cabinet ministers. The fourth wall is often broken, with characters addressing the audience directly and questioning the content of the play. Such theatricality lends the play much of its fun, even if it’s not entirely logical. Why, for example, would the characters Q and T—the representations of the elder Queen and Thatcher who have “never been fond of the theatre"—agree to “be” in the play at all?

I first saw Handbagged when it premiered in London at the Tricycle Theatre (now known as The Kiln Theatre) in 2013, the same year Peter Morgan’s seemingly similar play The Audience debuted. (Buffini has pointed out in interviews that she wrote a thirty-minute version of Handbagged in 2010). Morgan’s play provided a showy vehicle for Helen Mirren as Queen Elizabeth, and transferred to Broadway in 2015. Buffini’s play, however, is less a star turn than a metaphysical examination of the fractious relationship between two powerful women.

Perhaps The Audience’s success delayed Handbagged’s emergence on these shores, but its arrival could not be more timely. In the wake of the damaged “special relationship” between the U.S. and U.K., the Trump administration, and Brexit, events and themes in Buffini’s play are eerily prescient. The Queen uses the American President’s visit to Windsor Castle as a political stratagem. Thatcher declares she will “make Britain great again” (a slogan she really did use in a 1950 election). And Fox News founder Rupert Murdoch proclaims “if people like me ran the world, we’d be better off.”

Occasionally, a few details get lost (or changed) in translation from London to New York, at least when compared to my memories of the 2013 version. The elder Thatcher’s imperious declaration that “We have become a grandmother” (an actual Thatcher quote) got guffaws in London, but nary a giggle in New York. In another scene, Denis Thatcher’s tipsy appearance in a paper crown, a sure indicator of Christmas in the U.K., is here underscored by jingle bells to hit the Yuletide setting home. His joke about hosting the Kray twins (notorious London gangsters) appears to have been cut for American audiences.

The Brits Off Broadway production of Handbagged is based on the original Kiln Theatre production, but now produced by Maryland’s Round House Theatre. It retains original director Indhu Rubasingham, who smoothly restages Handbagged within the small confines of Theater A. The simple and elegant set, designed by Richard Kent, is dominated by a central white platform engraved with the Union Jack. Its sparseness allows for instantaneous changes of scene, defined by Jesse Belsky’s precise lighting design. Kent also designed the costumes, which capture the iconic silhouettes of the play’s leading women.

The cast shine in their respective roles, if (only occasionally) some of their accents wobble toward American vowels. Anita Carey is simultaneously majestic and practical as Q, the elder version of Queen Elizabeth, and she milks comic gold from sidelong glances of disapproval at Thatcher’s speeches. As T, the elder Thatcher, Kate Fahy displays grandiose yearning for power and poignant bewilderment when things finally don’t go her way. Beth Hylton is a wryly mischievous Liz (the younger Queen), while Susan Lynskey is a no-nonsense Mags (the younger Thatcher), who is occasionally surprised by her own power and given to flashes of anger. Cody Leroy Wilson and John Lescault shine in the scene-stealing, multi-accented roles of Actor 1 and Actor 2, the play’s de-facto Greek chorus.

While the play is scathingly critical of Thatcher, it is more cautious toward the Queen. She is glowingly portrayed as a champion of international comradeship and a trusty egalitarian, although Thatcher points out she didn’t pay tax til 1993. For all her niceness, the Queen remains somewhat inscrutable, unlike Thatcher, who becomes a kind of tragic hero who cannot see the limitations that lead to her downfall. While uneven in the critique of its central characters, the play nevertheless offers provocative and heartfelt portrayals of two strong, iconic women.