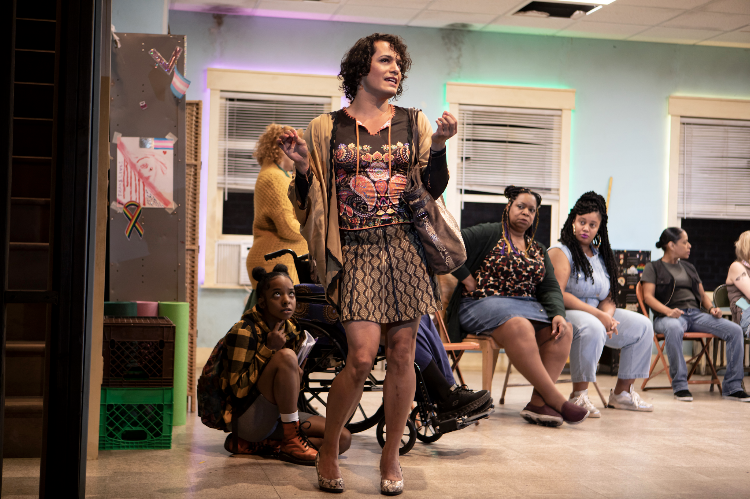 BOTTOM LINE: Spend three hours getting to know society's most resilient in this moving play from Stephen Adly Guirgis and LAByrinth.

It's talent show night at a halfway house for women on Manhattan's Upper West Side. Melba (Kara Young), who at 15 is the youngest housemate, reads an original poem—"Halfway Bitches Go Straight to Heaven"—about what led her to this place. While most of the audience applauds, Taina (Viviana Valeria) has taken her emotionally disturbed mother Sonia (Wilemina Olivia-Garcia) out of the room. Meanwhile, the transgender Venus (Esteban Andres Cruz) insists on her legally protected right to stay in the house, while Sarge (Liza Colón-Zayas), an Army veteran, refers to Venus as a man whose bed should go to a "real" woman who needs it more.

The community is populated by many people with considerable baggage, who will be nice to each other in private but are quick to add “don’t pin a kindness target on me.” There's Bella (Andrea Syglowski), a former junkie stripper with an infant son, who is romantically involved with Sarge. Young Mateo (Sean Carvajal) stays in the shelter while his mother lives with chronic illness. Rockaway Rosie (Elizabeth Canavan), not inaccurately described as a character out of All In The Family, knows what it’s like to have a degenerate fiancé. Venus connects with Betty Woods (Kristina Poe), a plus-size woman who refuses to shower. And Wanda (Patrice Johnson Chevannes), a real grand dame of the theater now in a wheelchair, has seen it all and is more than ready for it all to be over.

“There is no saint without a past, no sinner without a future.” That message by Saint Augustine, which applies to the staff as well as the residents, is delivered by Father Miguel (David Anzuelo), who keeps the women safe from a drunken husband (Greg Keller) attempting to violate his restraining order. Father Miguel also counsels janitor (and family man) Joey Fresco (Victor Almanzar), who is surprised to find that he's in love with Venus. Miss Rivera (Elizabeth Rodriguez) runs the office, rarely sees her daughter, and drinks while overworking. She has some choice words for Jennifer (Molly Collier), a young white social worker just out of grad school who is struggling to effectively communicate with the housemates. Similarly, Mr. Mobo (Neil Tyrone Pritchard), the administrator from Nigeria, thinks he is helping the women with many moral aphorisms that they don't understand.

That this still doesn't cover all of the characters gives you some idea of the breadth that playwright Stephen Adly Guirgis is going for here. Guirgis has surely written some profound, large-cast plays (think The Last Days of Judas Iscariot and Our Lady of 121st Street) but this one ups the ante, both in terms of reach and explicit social relevance. Veteran actor and LAByrinth member John Ortiz takes up the tremendous task of directing 18 human actors (plus a goat). The multi-level set, designed by Narelle Sissons, feels perfectly lived in and accommodates several believable fight scenes (courtesy of UnkleDave’s Fight House). Alexis Forte’s costumes show us every character’s personality, from the uncontrollably earnest Sarge, to the layered Betty Woods, to the fierce, yet flawed, Venus.

Guirgis' points start to become crystal clear midway through the second act, once that aforementioned goat makes his appearance. While things have always been strained, we start to see how the forces of gentrification may never care about the vulnerable characters we have spent the last few hours getting to know. Do all sinners really have a future? Interestingly, the men such as Father Miguel and Joey have had opportunities to better themselves. The younger ones—Mateo, Melba and Taina—may just have a chance. Venus, and others who are on parole, try their best, albeit imperfectly. But what about Miss Rivera, who has worked so hard to help others that she has lost her own family? Will Sarge, with her temper and her PTSD from time in Iraq, ever get to the front of the line? Over three hours, Guirgis manages to humanize many of the neglected women in our society; so, what shall we do to give people like them dignity and power?