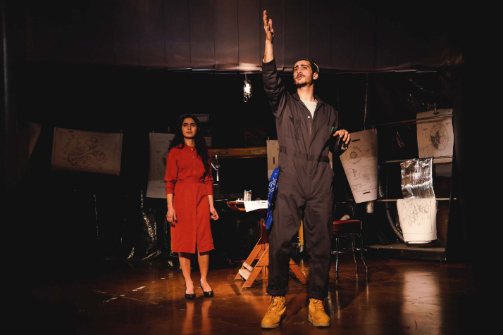 At the outset, Grey Rock seems to be a weak adaptation of the 2006 American film The Astronaut Farmer, set in present-day Gaza. Little guy with a dream trying to build a rocket despite a lack of funds or government backing? Check. Insurmountable obstacles somehow overcome after an inspiring speech? Check. A massive rocket "hidden in plain sight" during its construction? Check. Despite plot similarities, it may seem "apples and oranges" to compare a fully-funded Hollywood film with this touring production from Palestine, with a set, by Tal Yarden, seemingly modeled after tarp-covered Gaza refugee camps. Yet the play invites this comparison: someone comments early in the play that "flying to the moon sounds like something taken from an American science fiction movie."

Rather than a former astronaut, Grey Rock's guy with a dream is former television repairman Yusuf (Khalifa Natour). Natour delivers a sensitive, nuanced performance; the subtlety of his speech and movement are the anchor point of the piece. We are charmed by Yusuf's stubborn insistence that he is only building one rocket, just one, not "go[ing] around building rockets" as some might claim. His gleeful involvement as he interferes in the love life of his daughter Lila (Fidaa Zidan), and the physical comedy as he does so, offer the best laughs of the night. We are touched by his faithfulness and pride in his wife, and his grief three years after her death.

Perhaps in another production, other characters would seem equally compelling, but for the most part their comparative weakness seems part of the script. Fadel (Ivan Azazian), the young man who aids in Yusuf's secret project, proves to be absurdly absentminded, if not dim. Despite an apparently illustrious academic record and Master's degree, Yusuf is able to convince him of the project's merit by saying "rockets haven’t changed that much since the Chinese invented black powder. The same logic, just more sophistication," citing Newton's Third Law, and claiming that  scattered parts will be reassembled at the last minute for a successful space flight.

Lila is meant to be a bright young woman who was "top of her class" at university, whose light has been dimmed by her father's debilitating slide into grief and stubbornness. Yet at one point she asks Fadel, wide-eyed, if "the moon has gravity?" The two literally bounce off each other a few times during the play in a heavy-handed nod to "gravitational pull," a poor substitute for real chemistry.

Yusuf tries to tempt the ambition of Lila's spoiled, bullying fiancée Jawad (Alaa Shehada) with the promise that if Palestinians reach the moon, it "proves that we can be something." Jawad cuts a pitiable and less-than-menacing figure, inviting criticism of the regime that produced his "victim's mentality" more than any personal qualities. Sheik (Motaz Malhees), the town's imam, looks up to Yusuf as a religious expert and dear friend of his late father's, yet it's still jarring that Yusuf is able to flip his point of view by citing scripture in a matter of moments.

The fact that Yusuf is able to garner so much support for a poorly planned project is shown to stem from the Palestinian people's desperation in Gaza: those who aren't too afraid want to try something, anything, even if it might not work. In the cinematic plod of the rocket toward its completion, each mountain moved with a word, the play itself comes to be a form of wish-fulfillment: that religion and science, love and ambition might one day triumph and liberate the Palestinian people. Each character is seemingly defined by the way they might be inspired to pursue their own freedom—except Yusuf, who is more complex, and brings the show's only real twist. Though the full unfolding of Yusuf's heart and his own, real reasons for the project offer some surprises and touching moments, the story concludes with one final wish-fulfilling gesture.

Perhaps by appropriating the plot of a blockbuster Hollywood science fiction story, and having his Palestinian actors successfully struggle through it in English, Amir Nizar Zuabi is following Yusuf's example: attempting to inspire his audience in the language they'll best understand. Whether either of them achieves their goal and reaches the moon, or at least lands among the stars (as the adage goes), is up for audiences to determine.