Jacqueline Novak: Get On Your Knees

Written and Performed by Jacqueline Novak; Directed by John Early 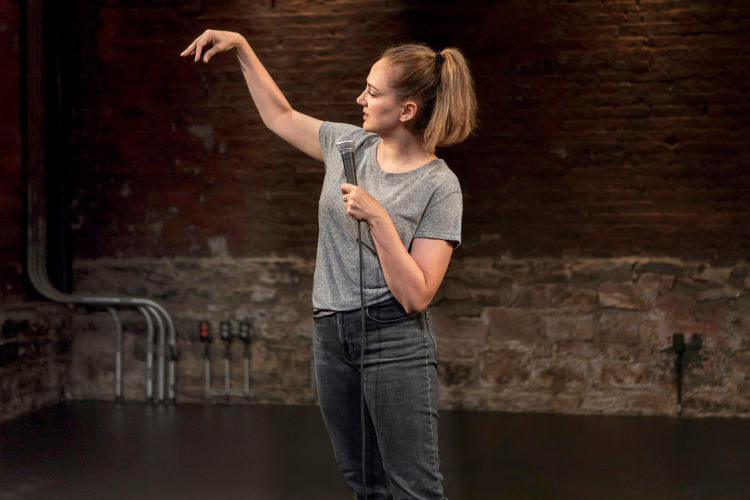 BOTTOM LINE: Comedian Jacqueline Novak makes her Off Broadway debut with this funny, thought-provoking show about oral sex that could do with a little more fleshing out.

Novak, who has logged time on The Tonight Show and The Late Late Show and was named a “Comedy Central Comic to Watch,” brings a dry wit and a sharp eye to the subject of oral sex, from dicks to vaginas and everything in between. She jumps right in, telling the audience “I will be talking about blow jobs a lot, to the point of tedium” (referencing a critic’s take on her show). Admitting to “being a heterosexual woman” and having a boyfriend, Novak is "not proud. To be a cave woman yearning after the shaft…You’re thinking, ‘does she even read?’”

Novak became focused as a young girl on the idea of successfully performing the act, getting a bit of an early education from some high school girls when she was 12. Wholly indifferent about her virginity, it was oral sex that confounded her - what to do with the lips, how not to bite, how to initiate it for the inaugural run – and this became her big challenge. After an unsuccessful single go with her first boyfriend (even aided by her field hockey team chanting “blow him!”), she took a hiatus. Perhaps due to reading Tony Robbins' self-help books in grade school, Novak adopted a “no quitters” mentality. It didn’t take her long to achieve her personal Holy Grail: “I went off to college feeling like Philip Roth, a Jewish pervert ready to teach.”

Like the older girl who had been a BJ champ, Novak became a queen at Georgetown. Her simple philosophy: “I met guys I liked and blew them. What can I tell you, death is coming.” Eventually, Novak had time to contemplate the blow job on a more cerebral level. She thinks of the vulva as a “pulsing, masculine ideal, like Vin Diesel in the sunshine.” The penis, on the other hand, hasn’t earned her respect. “When I call a penis ‘cock,’ I’m not calling it like I see it. I’m telling it what I think it wants to hear.” She wonders how the penis ever got compared to an anaconda because “snakes strike with precision. I’ve never not guided a penis.”

Novak nails the nonchalant attitude that serves this material well. And with her honesty and humor, she’s created a performance that’s about more than just blow jobs. But her narrative feels incomplete: if she wasn’t being pressured and her boyfriends seemed less compelled to tick the item off the sex list, why was she so invested in blow jobs? Why was the act more significant for her than any other? While its tone is breezy, Get On Your Knees could have done with a little more struggle, or perhaps explored more how Novak's confidence grew over time.

That said, I love Novak’s sex positivity; a show that encourages people to dispense with hang-ups and the shame around sex is worth checking out. Remember, death is coming!

Jacqueline Novak: Get On Your Knees is written and performed by Jacqueline Novak. Directed by John Early. Lighting Design by Stacey Derosier. Sound Design by Theda Hammel. Stage Manager is Cate DiGirolamo.