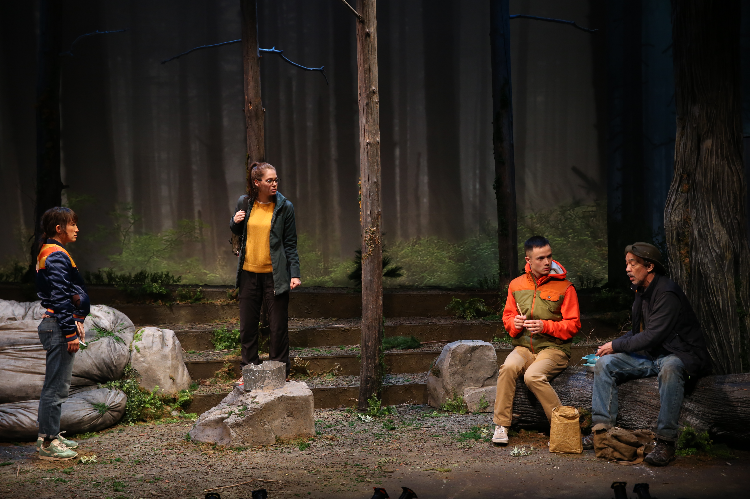 BOTTOM LINE: Some family members never change, even when everyone else changes around them.

It’s easy to get lost in the North California mountains where cellular service is spotty and the GPS rarely works, but hunters of wild mushrooms will delight in the great outdoors—sometimes to the detriment of the loved ones they’ve left behind. In Fruiting Bodies (a scientific term for mushrooms), Ben Nakagawa (Thom Sesma) is a father who would rather spend his golden years foraging for wild mushrooms than with his adult children. It’s clear that Ben’s mind is beginning to deteriorate as his memories begin to collide. He mistakes his grown son for a lost child, reliving their glory days and exposing the reasons for their current estrangement. His concerned daughters pursue him, only to be rejected and rebuffed time and again.

The Nakagawa family is a blended one. Ben Nakagawa is Japanese-American and his estranged wife is Finnish. Although the crux of the play isn’t necessarily about being Japanese, Japanese-American or Biracial, the seeds of diaspora and identity are themes that allow the plot to truly blossom. A preference for male children rears its ugly patriarchal head, even when daughters have the wild spirit of their father or have achieved enviable financial success. The question of appearing Asian or passing as white becomes a significant concern, and attempting to raise children in the United States with old-world prejudices can be a recipe for disaster.

Sam Chanse’s writing excels in this, creating a refreshing world where racial identity is seamlessly intertwined with the rising action of the play, but is not the cause of primary theme or plot. Competitive sisters Mush (Kimiye Corwin) and Vicky (Emma Kikue) are a delight to watch, as is the unexpected rivalry between Vicky and the Boy played by delightful chameleon Jeffrey Omura, who takes on the role of several characters.

Unfortunately, there are times where the script veers a little too far from its roots, and pacing becomes a concern. Monologues about mushroom foraging begin to feel didactic, while lengthy dialogues slow down the action considerably. Conversely, it would have been beneficial to spend more time during an important reveal that is juxtaposed against a hilarious tantrum, as our focus is pulled in too many directions during a scene of great emotional impact. Although Chanse has created a lush world, anchored by fascinating themes and perspectives, it feels like Fruiting Bodies is still finding the best pathway to flourish amidst a changing and complex climate.