Fiddler on the Roof
(A Fidler Afn Dakh) 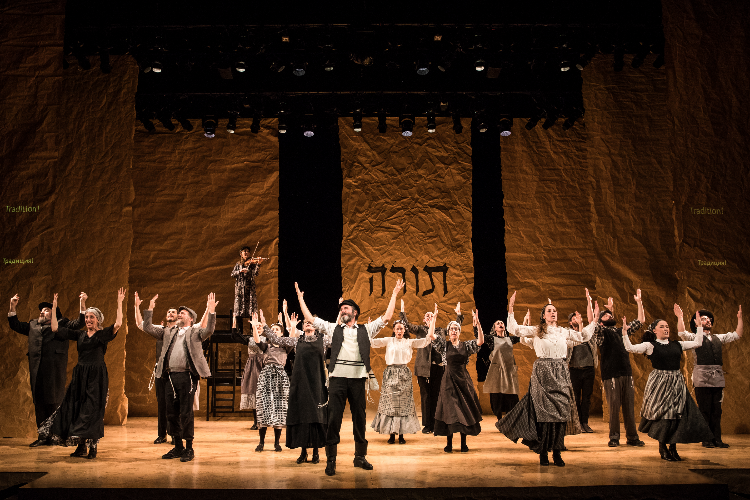 The company of Fiddler on the Roof (A Fidler Afn Dakh). Photo by Matthew Murphy.

BOTTOM LINE: The National Yiddish Theatre Folksbiene’s masterpiece-revival of Fiddler on the Roof (A Fidler Afn Dakh) crackles with warmth, authenticity, and a call for tradition in this timeless tale of a changing shtetl.

At the onset of Fiddler on the Roof, the humble dairyman Tevye (Steven Skybell) pulls his hefty cart for his lame horse. Schlepping back home to his wife and five daughters, he pauses to rest and whisks the audience into the world of his humble village—his shtetl—Anatevke. Familiar tunes of “Tradition” boom as the cast floods the stage with rigid choreographic concentration. All wear subdued, albeit traditional, gray-scale clothing. We are introduced to the core of the play: everyone is a fiddler on the roof, trying to scrape out a pleasant simple tune without breaking their neck. They stay up there because Anatevke is their home. They keep their balance with tradition. Thus unfolds the familiar, beautiful story of Fiddler on the Roof. It's through this black and white tradition that the people of Anatevke all know what roles they must play: the mother “muter,” the father “tate,” the sons, and the daughters. Through their tradition, life in Anatevke is laid out ahead of them, clear and precise.

As the story unfolds, bending just a little threatens to let their whole world break; when Tevye loosens his grip on tradition, his world seemingly falls apart. As he sees his three eldest daughters Tsaytl (Rachel Zatcoff), Hodl (Stephanie Lynn Mason), and Khave (Rosie Jo Neddy) marry, each marriage bends (or breaks) tradition more than the previous. And as his home life evolves, his shtetl collapses around him, and the world becomes an uncertain place. As the twentieth century begins to rear its ugly mug of anti-semitism, Tevye—heartbreakingly so—blames his own abandonment of tradition first: “One little time I pulled out a thread, and where has it lead?” It’s no surprise when the parchment set piece reading “Tradition” in Hebrew becomes ripped and haphazardly repaired during the play.

A key element to successfully reviving this production so recently after the acclaimed 2016 Broadway revival is the translation into Yiddish. Even for those with little knowledge beyond American adoptions of Yiddish terms, the subtitles bordering the stage are easy to follow. What’s better, the story proves to transcend language, as many scenes can be enjoyed without the need for exact words if you should choose to ignore the subtitles at times.

The use of Yiddish here also allows the play to be removed from Americanisms so much that it becomes that much more universal. Here we watch a classic, adored musical in a different language, but still latch onto Tevye’s journey with a grip that is just as tight. In seeing this masterpiece in a new language, perhaps with “fresh ears," the experience of these characters feels far from that of other productions, yet remains grounded in a contemporary sentiment. The use of Yiddish allows Fiddler to feel completely authentic in its portrayal of this shtetl without needing to rely on previous caricatures of these brilliant residents of Anatevke.

The National Yiddish Theatre Folksbiene’s Fiddler on the Roof originally opened in July of 2018 (before moving uptown this spring). In a piece for the New York Post, director Joel Grey said that “four months before the FBI released its report citing a 17 percent spike in hate crimes nationwide, from 2016 to 2017—a period that saw a 37 percent increase in crimes specifically against Jewish Americans...Our very survival is, once again, at stake” (full article here). Indeed, the U.S. has recently witnessed ugly crimes against our own Jewish communities, reopening wounds and worries that are not unique from the bending, breaking lives in Fiddler. Sitting in the audience, a swell of pride bursts from the stage into the house; decades after its debut, Fiddler on the Roof remains essential for audiences, for Americans, and for inhabitants of a world on the precipice overlooking the abyss. Regardless of language, it is a triumph of courage in the face of opposition, and like Tevye, will always find the smallest spark to brighten a dreary conversation.