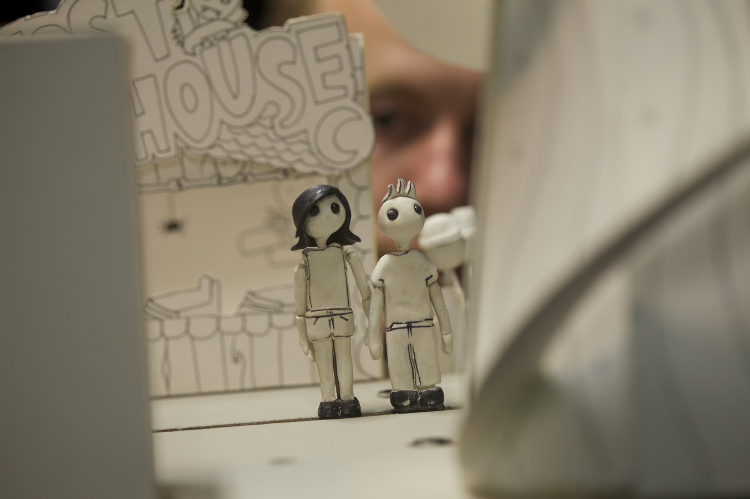 Dawn and Joe in Feral. Photo by Amy Dawnes.

BOTTOM LINE: This puppetry piece looks at the demise of a community through the lens of childhood memories...as well as through actual camera lenses.

The poster for Feral looks innocuous enough: two puppet figures look as though out of a child’s drawing. And the play does start that way—whimsical and perfectly innocent. We see the making of an idyllic seaside town; hand-drawn characters and different houses are projected while three-dimensional paper models are erected around the puppeteers’ work station, which all gradually transforms into an otherworldly backdrop for what’s about to unfold.

Feral, created by Scottish company Tortoise In A Nutshell, is not a puppet show in the traditional sense—live projections create a PoV tracking effect. We also get to see the fine details the designers have created on the set. The puppets themselves don’t have a wide ranges of movement. Instead, the aesthetics resemble more a dollhouse coming to life. We end up watching a live documentary about the rise and fall of a small town from the perspective of some local kids. But what seems at first a cutesy story turns into something much more serious. (If you've seen and loved manual cinema's ADA/AVA or Deconstructive Theatre Project’s The Orpheus Variations, Feral would be right up your alley.)

We meet our protagonist Joe, sitting at a sketch table and reminiscing about his childhood town. In a childlike style, he draws himself, his older (and wiser) sister Dawn, their mum (who’s constantly knitting), and their cat. As we follow Dawn around town, we get well acquainted with this world: the butcher shop and the dog who steals sausages; the Sailors’ Arms pub and the guys who have made a home there; the pre-Victorian lighting place; the Spray and Waves hair salon with its satisfied ladies. Soon, the park at the town's center closes to give space for "Supercade,," a new arcade game center. But things turn dark when Supercade does not bring more jobs or wealth, but instead drives the town into a state of utter chaos, and eventually anarchy.

I’ve seen some disturbing puppetry works in the past few years, but Feral, with its innocent exterior, takes the cake. What makes it even more fearsome is the fact that it’s an accurate fable about what happens to a place when the government does not care about the welfare of its people, and only makes choices based on supposed short-term gain.

Feral is not easy to watch, despite its simplicity. It becomes an incredibly complex and nuanced story the further in you delve. And this complexity is not just in the writing, as is evidenced by Jim Harbourne's sound design wizardry, which seems to be a human multi-instrument. Feral is at its core about the loss—of a home and a community—caused by greed. And that’s something gigantic to unpack from a piece that spends so much time at such a miniature scale.

Feral is devised by Tortoise in a Nutshell. Directed by Ross MacKay. Set Design by Amelia Bird. Lighting Design by Simon WIlkinson. Original Music and Sound Design by Jim Harbourne.