Fefu and Her Friends

By María Irene Fornés; Directed by Lileana Blain-Cruz
Produced by Theatre for a New Audience 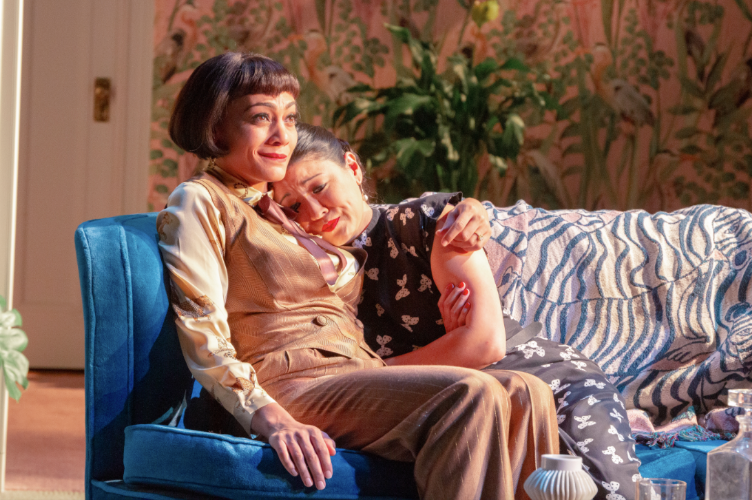 Amelia Workman and Jennifer Lim in Fefu And Her Friends. Photo by Henry Grossman.

BOTTOM LINE: María Irene Fornés wrote this distinctive, rarely staged play about intelligent women spending a weekend together in 1935. It should disturb you in 2019.

All hail Theatre for a New Audience. Lileana Blain-Cruz directs a stellar, multi-racial, all-female cast in the first major revival in forty years of Fefu and Her Friends, María Irene Fornés’ quietly revolutionary avant-garde play. The women depicted are educated, peculiar, and very real, college classmates who reunite at a house in New England in 1935 to plan a fundraiser. There are laughs, and love affairs, and a water fight, and a hunting gun, and much discourse on art. It feels like a Goethe tale that passes the Bechdel test.

The late, great Fornés guides us through a dramatic structure that you will encounter more often nowadays in site-specific pieces: During the middle of the play, the audience splits up and walks around to different rooms in the house (all with dazzlingly fashionable wallpaper, thanks to Adam Rigg’s scenic design) where more intimate activities are happening. Overhearing their private conversations makes these women even more amazing, and all this without a multi-floor or rotating set piece.

In this production, Fefu (Amelia Workman, whom almost everyone knows not to call "Stephany") is a fascinating, complicated woman who seems to dislike other women, who loves her friends and claims to prefer male friends...although she will not let her husband into the house and we do not see any men during the play. She tells Cindy (Jennifer Lim) and Christina (Juliana Canfield) that she and her husband play a game: She shoots a gun in his direction and he ducks. Perhaps the gun is loaded with blanks, but no one knows. From the first line of the play—"My husband married me to have a constant reminder of how loathsome women are”—to the way Fefu carries a plunger and fixes things around the house, to her belief that insanity is contagious, to her blouse adorned with leopards, contrasting with her friend Julia’s (Brittany Bradford) zebra-print dress, Fefu can be intriguingly mercurial and scary. In many ways, she resembles the avant-garde authoress, salon hostess and female misogynist Madame Rachilde. The play alludes to the work of female intellectuals, such as the anarchist Voltarine de Cleyre, and if you haven’t heard of them, that would seem to echo Fefu’s assertion that in her day, women have been taught to be afraid of themselves.

While contemplating their fundraiser, the women call on the superhuman power of theatre. Julia is in a wheelchair: a hunter shot at a deer and the bullet also hit Julia, but doctors don’t see a physical reason for her paralysis, which causes occasional hallucinations. In Part II, as audience members move around the set, we look down through a glass panel at Julia lying in bed, having a kind of fever-dream monologue in which she addresses some unseen judges. They are seeking a Catechism-style reinforcement of the origins of evil, which is traditionally the physical and sexual nature of women. Even in her sleep, Julia has internalized these mores. The performance and Jane Cox’s lighting design are so good, it gave me chills.

It would take a lot of effort to overcome the setting's patriarchal prejudice, ableism, and Depression-era economic woes, but Fefu has an empowering bobbed hairstyle (courtesy of hair and makeup designer Cookie Jordan) and a pantsuit to die for (designed by Montana Levi Blanco). While playing croquet, her friend Emma (Helen Cespedes) cracks her up with her thoughts about genitals and her belief that angels grade everyone’s sexual performance. Paula (Lindsay Rico) critiques economic inequality when she reminds everyone that she was a scholarship student. When Cecilia (Carmen Zilles) and Paula (Lindsay Rico) cross paths in the kitchen, it is clear that they were once in love. In all these ways, the women reveal themselves to each other and form closer bonds.

There’s no one like María Irene Fornés, she who throws us into a verdant hunting lodge which it is hard to tell is really in New England. Fornés has also discovered that a love affair lasts seven years and three months and can run us through the immutable stages. This production is a thought-provoking triumph for Lileana Blain-Cruz and the many personalities she and the ensemble have detailed. (Theatre For A New Audience’s website provides a slew of interviews with the talented cast and crew, and provides some insight into the unique writing style of the Cuban-born Fornés and the generation of Latinx writers whose lives she touched. There is some discussion of the nail-biting ending of this play, but you’d kill me if I revealed that.)