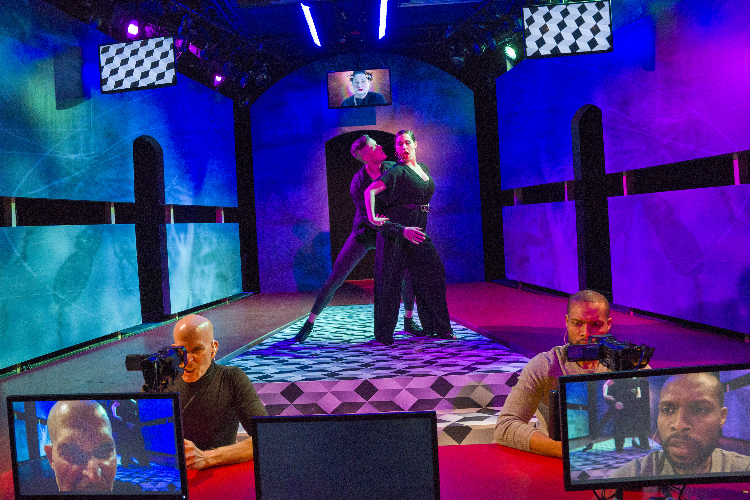 Good old Faust. The German academic who, grown bored with intellectual pursuits, enlists a demon to show him the world's earthier pleasures, is a perennial stage favorite (in fact, there's a kid-friendly version of his story playing right across the street from the one in this review). Long-lived downtown theatre company Mabou Mines is taking a second stab at Goethe's 19th-century verse drama: having previously explored Faust Part I in 1980's Dead End Kids, they're now focusing a distinctly 21st-century lens on Faust Part II. The resulting piece, Faust 2.0, contains moments of humor and beauty but doesn't coalesce into a clear or fully satisfying experience.

Blending live performers with pre-recorded video and incorporating dance and music into the action, director Sharon Ann Fogarty's interpretation of this timeless tale is constantly surprising, if not always inspired. The plot follows the frustrated Faust (Benton Greene) as he devotes himself to radical self-interest and pleasure with the assistance of the demon Mephistopheles (Paul Kandel). Running scams and ingratiating himself with Very Important People, Faust gains power. Oddly enough, this leads him back in time to ancient (or rather mythical) Greece, where he hooks up with Helen of Troy (Angela Impellizzeri) and enjoys married life for a while. But when that ends in tragedy, Faust returns to the modern world, where he concentrates on warfare and wealth.

It's somewhat astonishing how frequently Goethe's text (adapted by Matthew Maguire) seems to have predicted the future, with dialogue and plot points that appear to allude to globalization and climate change. These moments, buttressed by the playful, amusing and often bizarre video design by Jeff Sugg, come closest to justifying Faust 2.0's existence. Jim Clayburgh also deserves praise for his set design, which looks as if the Black Lodge from Twin Peaks ended up in a painting by René Magritte.

However, the play has too many "Huh?" moments, starting with the question of why so many of its characters are shown to us only onscreen. A number of Mabou Mines' regular collaborators, including Greg Mehrten (as a hapless German Emperor) and Karen Kandel (as a creepy evil spirit) have, for all intents and purposes, given entire performances on video. One can't help but think that this is a back-door method of assembling a large cast without actually having to get all those folks onstage together. Given that we now live in a world dominated by screens, the choice to use video and live feed makes sense intellectually, but it's not always convincing dramatically. Also, the play's conclusion (no spoilers!) seems to come out of left field. Perhaps Goethe's full text would support this ending, but based on what Maguire's adaptation contains, it's almost nonsensical.

New York's theatrical culture would be significantly poorer without the work Mabou Mines has done over the decades, particularly in reimagining the classics. Let's hope they don't stop anytime soon. Let's also hope that the next time they sink their teeth into a text, they rely less on the trappings of post-modernity and more on their own deep pool of experience and talent.

(Faust 2.0 plays at 122CC, 150 First Avenue, through April 14, 2019. The running time is 1 hour 40 minutes with no intermission. Performances are Tuesdays through Saturdays at 8 and Sundays at 4. Tickets are $25, $18 for students and seniors, and are available at maboumines.org.)