By Cara Francis; Directed by Nessa Norich
Part of the So-fi Festival 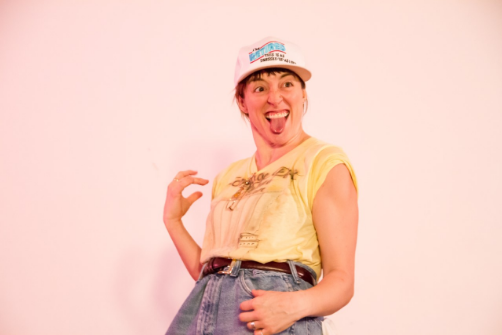 BOTTOM LINE: Cara Francis brings us into her conversations with her gun-friendly, guitar solo-loving father in a humorous, sympathetic way.

Cara Francis, veteran of the high-energy performance troupe the New York Neo-Futurists, is a real chameleon. At times during her solo show Dad she speaks as a young woman afraid, or in awe, of her father. Though Cara accompanies her Dad to the shooting range and tries to understand his world as a "junior" (Dad goes by "Dick" and so she is "Little Richard"), Francis describes the result as not necessarily acting like a tomboy, but more like a gay son. For most of the show, Francis postures perfectly as Dad, a character who is surprisingly recognizable. He compulsively reads mail-order catalogs, hangs out at the local gun shop, communicates through carefully selected Deep Purple guitar solos, and defends his rights under the manufacturer's warranty of every product he owns.

But as father and daughter age, we see that Dad is vulnerable. He takes a variety of pain medications, so many that his doctors need him to stop smoking marijuana. As a divorced, middle-aged factory worker, he does not seem to understand white privilege, feminism, and other matters important to the younger generation. This Dad is as subject to life's upheavals as anyone. At age 50, he finds out he is illegitimate and changes his interactions with his family. Only a night of visiting a strip club and getting high with his daughter can make things anywhere near normal.

Cara Francis delivers an energized, thoroughly personable performance as Dad. I wish I had gotten to see the Father's Day performance. (An anecdote in the play informs us that Father's Day was first celebrated in Spokane, Washington in 1910; Washington is also the state with the greatest number of (usually male) serial killers.) Director Nessa Norich coaxes out so many beautiful, awkward moments and facial expressions, especially the guitar solos, which may well remind you of some male relative or other.

At one poignant moment, when Dad is terminally ill and Cara visits him in the hospital at the time of the 2016 election, others around them rejoice at the victory of Donald Trump, the daddy whom so many people have wanted for so long. And when Dad goes to his maker, it's with a stash of guns (not counting those he's buried with) and a secret safe full of opioids. If he might seem foreign to many in NYC, perhaps he also has something to teach us. Dad makes a huge effort to get to know all dads: rich ones, poor ones, the creepy ones in the neighborhood, and the lesbian on the block who pulls weeds with a "dad vibe." What about dads can be so inflexible, and what could we all try to change going forward?

Dad is written and performed by Cara Francis. Directed by Nessa Norich.