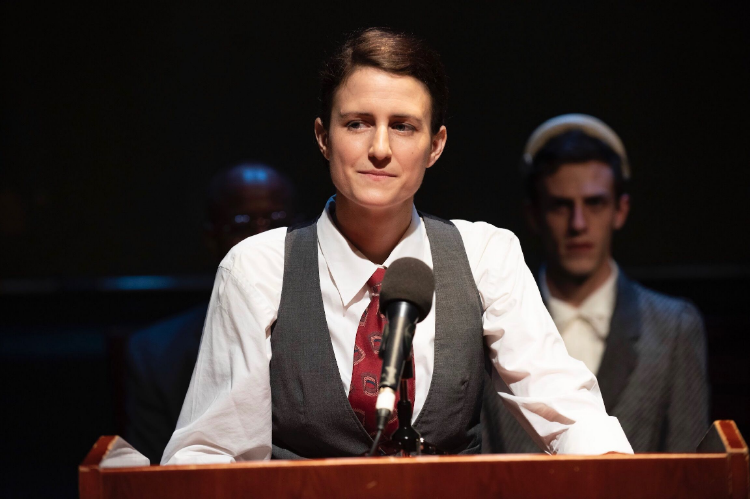 BOTTOM LINE: Events of the 1944 Democratic National Convention are brought to life by a cast of forty in this immersive play.

In response to the 2016 election, playwright Danny Rocco dug out a “true-and-overlooked” episode in history—the 1944 Democratic National Convention—and turned it into an epic theatrical reenactment with forty actors, opening just in time for the Democratic presidential debates. Rocco’s goal of educating the audience about political history is truly noble; whether it has been achieved is another question. I entered the theatre knowing nearly nothing about this historical precedent, but left feeling confused and alienated. On the other hand, my companion, who knew all the main political players, enjoyed the show more, although he was disappointed that many liberties were taken with rendering some of the characters.

To sum up the main intrigue, during the 1944 convention there were two candidates for vice president, Harry Truman and current Vice President Henry Wallace. Coalitions formed, each gathering separately in the locked theatre to pledge their allegiance and develop strategies for manipulating the party-mates. Even though Franklin D. Roosevelt had already expressed his support for the moderate Truman, the hope was still strong for the allies of Wallace, a popular progressive candidate often accused of being a communist sympathizer. And this was an important vote: Roosevelt’s health was in rapid decline, so choosing the vice president likely also meant choosing the next president.

The audience for Convention is thrown right into the middle of the action, both narratively and sonically. The show starts with Wallace (Claire Anderson) trying to speak over the roaring tributes, an absolutely mad scene that lasts for a few minutes and conveys the full sense of attending the real convention. Dialogue takes place on stage, in the orchestra, and in the second-floor gallery, often simultaneously. At times it is impossible to hear a single word, which can be frustrating, but if clearly done deliberately. Collecting the information from bits and pieces of dialogue, some of which happen at an arm’s stretch, feels very true to life, where as much as you try, you are unable to grasp the entire picture.

That said, many key scenes are staged with the intention of sounding loud and clear. Director Shannon Fillon does an amazing job of conducting the “orchestra” of forty characters: the timing of this massive “machine” is impeccable. But as much as the actors try to convey a wide variety of three-dimensional characters, I wished we were given more historical background on some of them, at least the featured ones. While including this in the play's text itself wouldn't have worked, this information could have been included in the marketing materials. The headshots of actors are hung next to the historical figures they portray along the staircase leading to the theatre; placing these in the electronic program or on a website alongside bios of these real people would improve the audience's experience.

But my lack of historical knowledge didn’t spoil the evening. The array of colorful characters, cast gender-and-race-blindly, is never dull to watch. Rocco masterfully mines absurdity out of comedic bits (the enterprising hot dog salesman who permanently parks his cart on the stage) and also reveals the darker side of the joke (a sandbag hitting one of the delegates). And although the production isn’t fully immersive, it is certainly quite atmospheric. Convention is a perfect match for the Irondale: the carefully preserved shabbiness of the former Sunday school, with fragments of religious text on the walls, is a perfect backdrop for the scene of Jackson’s sudden realization of God’s calling. Even the absence of air conditioning helps us better imagine a hot day in Chicago in July of 1944.

(Convention plays at Irondale, 85 South Oxford Street, Brooklyn, through June 29, 2019. The running time is 2 hours with an intermission. Performances are Mondays, Thursdays, and Fridays at 8; Saturdays at 3 and 8. Tickets are $18 and are available at irondale.org. For more information visit brontosaurushaircut.com.)