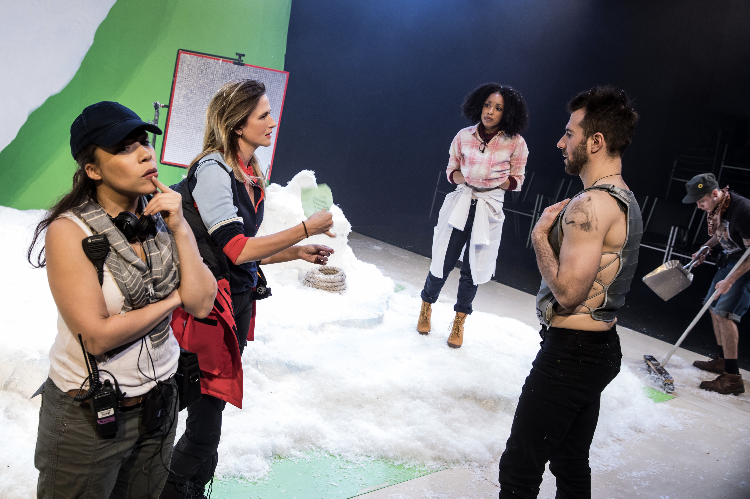 BOTTOM LINE: This darkly comedic movie-within-a-play has some laughs and a winning cast, but the message about saving the planet doesn't quite land.

In the month of May, New York has basically experienced all four seasons, going from winter-coat weather to near 90° in the span of a fortnight, making the topic of climate change timely. It's also a subject film director Maria (Rosal Colón) feels passionately about. Maria, who up until now has only directed little-seen independent movies, is excited to do her first big Hollywood picture—in which she must shoot an ice-covered landscape in the New Mexico desert—because she wants to make a movie "that will change people's lives. It's all I've ever wanted since I filmed my amputated Barbies." So she tries to look past the dumbing-down of her script over incessant revisions. In fact, it's her script doctor ex-boyfriend Caxton (Darren Goldstein) whom the studio has sent to help "manage" the story, as well as lead actress Nicole (Megan Ketch), who has just gotten out of rehab.

Continuity opens on a climactic scene between Nicole's ecologist character Eve as she tracks down George, played by Jake (Alex Hurt), a eco-terrorist with a gun and a bomb strapped to his chest as he's about to kill the scientist Anna, played by Lily (Jasmine Batchelor). The scene is a framing device for the play as we see it redone multiple times in different takes (the subtitle for Continuity is "a play in six takes"). George's bombastic dialogue—"This is my home. The Earth. This bomb is humanity's wake up call"—makes clear the movie's tone.

When Maria yells cut, Nicole immediately starts giving her opinions about the writing and whether Lily's scientist character should wear glasses. Jake, who speaks with a sort of "Bro" So-Cal accent but proves to have a little more going on than it would first appear, argues with Nicole over who's more green, while also knowing all the on-set gossip. Meanwhile, Caxton undermines Maria by agreeing with Nicole to put a speech back in. Of course, he's also interested in Nicole, who is rumored to have left rehab a little too soon. Further throwing a wrench into things is Larry (Max Baker), the science expert the studio hired. He's there to offer his knowledge on the effects of the sun's heat on the ice, but as he points out the absurdities in the plot, his main concerned is that the "science" in the movie will aid climate deniers. But really, he argues, it's all pointless anyway because it's "too late. I can't pretend anymore."

Of the actors, most enjoyable are Goldstein, who plays Caxton as more than a mansplaining jerk, and Ketch, who gives subtlety to Nicole, a character who could easily become a one-dimensional stereotype. And a special shoutout to Garcia, who adds a lot of comic relief as the beleaguered, unappreciated, silent (and otherwise unnamed) PA who is repeatedly called upon to replace a rock that everyone wrecks while maintaining perfectionism when it comes to the snow (Adam Rigg's sets are a highlight) on the ice floe set.

Bess Wohl has created an entertaining play about climate change with the backdrop of a movie setting. And she's written some funny scenes—my favorite is when Nicole, after (presumably) snorting coke, races through her dialogue without taking any breaths or pausing for the other characters. But Continuity would work better as either a comedy or a serious drama about climate change. Put another way, the comedy seems more organic than the inclusion of the environmental concerns. Although perhaps Continuity, though flawed, can do its small part to upend Larry's pessimistic assessment of humanity: “The people who watch the most,” he says, “help the least.”