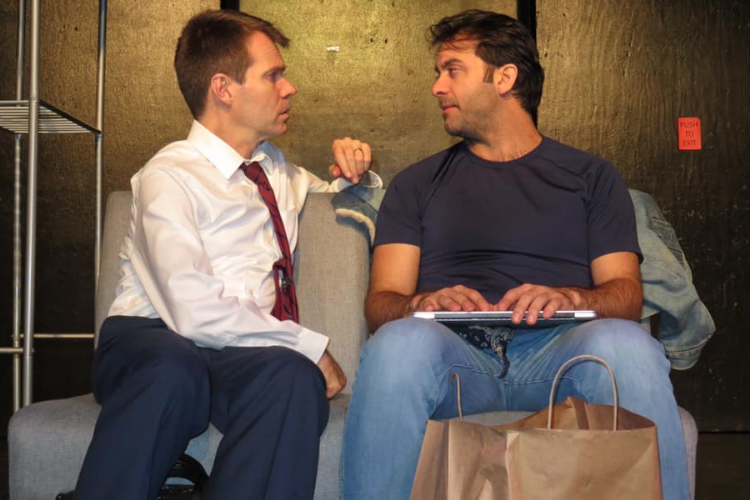 BOTTOM LINE: Two short plays by Richard Alleman are a horrifying and hilarious attack on the ignorance of the wealthy.

They say life is a journey. If so, doubtless everybody would prefer to travel with comfort and in pleasant company. But will the ticket to a first-class life grant you eternal peace? Not necessarily. Two short plays by Richard Alleman, combined in one Frigid Festival evening under the title Comfort Zones, examine what might happen if one’s cushy journey is disrupted.

In Quiet Car, two strangers are forced to share a ride on Amtrak. Listed in the program simply as Actor A (Russ Cusick) and Actor B (Frankie Delessio), they are a perfect mismatch. A is on the way back from an intense work trip to D.C., looking to kick back and read a newspaper. But it seems like it B’s solemn mission to make this ride hell. The passive aggressive cockfight for personal space starts out as an amusing physical sketch and quickly becomes a transcendental experience.

Cusick, playing an uptight lobbyist, and Delessio, an annoying writer, are a perfect comedic duo. Under the direction of Anthony Newfield, the nightmare about a terrible fellow rider comes to life despite the scarcity of the set. Quiet Car challenges the delicate balance between personal and communal spaces—not only on a train ride, but also in the sense of sharing responsibility for the well-being of the planet. Alleman loads this short play with politics, life-altering choices and mystical elements, nearly exceeding its capacity.

The second play, Adrift, trades metaphysics for dystopian fantasy and approaches the same issue of taking responsibility for the world outside of one’s bubble. A wealthy, older WASP couple is sharing a pleasant ride on a luxury cruise ship. Todd (Daniel Popowich) dedicates his days to virtual golf while Betsy (Donna Svennevik) is taken by Zumba and sexy instructor Milos (Alen Klapija). All would be splendid if the seafood buffet wasn’t carcinogenic and the future didn’t look so bleak.

The world outside the SS Universe is shaken by political unrest and ecological disasters. There is no safe patch of land and only the wealthy can afford to forget about it. But Betsy doesn’t want to be oblivious. Even the numerous designer glasses scattered on her table can’t tint the reality any longer. It just takes a boat full of dying, innocent people to finally wake her up.

Comfort Zones goes mercilessly after the ignorant. Be it the physical humor of Quiet Car or the absurdist horror of Adrift, Richard Alleman uses his various verbal weapons skillfully. The twist in one play seems a little too easy, and the sexual drama Adrift becomes a bit a like a soap opera. But despite this I had a great time, laughing while being simultaneously horrified.