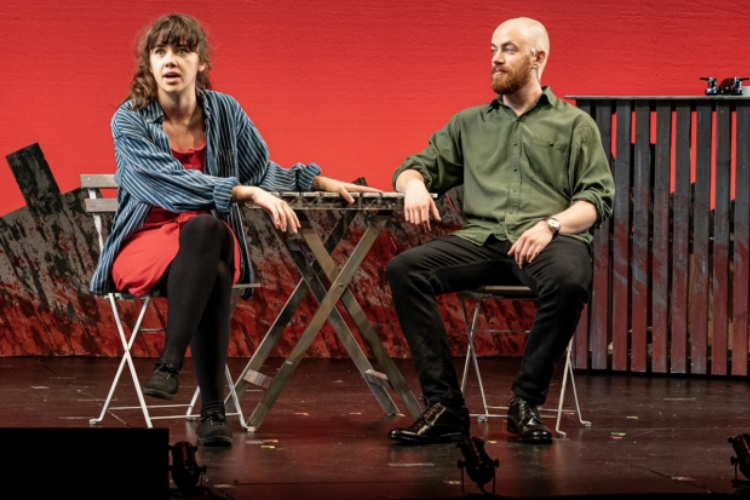 Rose and Harry have each gotten stuck in the same rut: they just can’t keep themselves from killing potential mates on the first date. But when the two serial killers, played with dazzling charm and ease by Sebastian Belli and Lindsay Manion, discover their shared passion for offing strangers, sparks fly.

Buried, a British import from the University of Sheffield and the Edinburgh Fringe, brings a totally twisted and utterly lovely shimmer to the 2019 New York Musical Festival (NYMF). Yes, Buried’s protagonists are probably—no, definitely—psychopaths, but the lush folk score by Cordelia O’Driscoll (Tom Williams shares credit for the smart, sometimes wistful lyrics) meets Rose and Harry where they are, lifting up even their most violent fantasies in a groovy whirl of surprising dissonances and tremolo strings. (Music director Olivia Doust supplies the gorgeous orchestrations.) Buried is at its funniest, and most romantic, when it sets the central couple’s murderous musings against the warmly unthreatening, though sometimes off-kilter, music: we feel the sick irony but still experience the pair’s warped tenderness all at the same time.

A quartet of backup singers—Niamh Finan, Laurence Hunt, Wilf Walsworth, and Rebecca Yau—all show graceful comic chops in playing a variety of minor characters (most of whom get the axe). Williams also provides the clever book and stages the show smoothly and unobtrusively: Belli and Manion don’t have to compete with any distractions from their razor-sharp, thoughtful performances.

Though it runs a graceful 90 minutes, Buried’s second half probably still features one too many ballads as the tone shifts away from broad comedy. A musical number on a TV talk show about psychopaths also feels like padding. But Buried arrives at NYMF already well prepared for bigger things. A cast recording would be well-earned—despite the subject matter, a surprising number of songs could have a rich concert life outside the context of the show. Wherever Buried turns up next, it’s bound to make a killing.