By Eliza Bent; Directed by Annie Tippe
Presented by The Habitat and Bentertainment, in association with Ryan Gedrich

Off Off Broadway, Play
Runs through 3.2.19
Next Door at New York Theatre Workshop, 83 East 4th Street 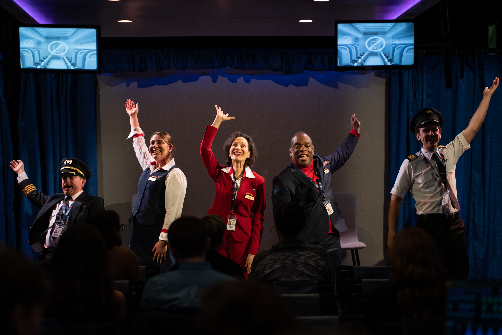 There's something oddly existential about plane rides: whether it’s the thrill of travel, the potential for danger, or the hassle of sharing close quarters with strangers, an airplane trip can lead us to ponder life’s big questions and our place in the world. Through the story of Jan, a retiring flight attendant, Bonnie's Last Flight holds a comic lens to these subjects, probing the finer points of air travel and mankind’s search for meaning.

Through airplane-style aisle and perimeter seating, director Annie Tippe places us onboard a “Smelta” airlines flight as Jan (Barbara Walsh) prepares for her final voyage with the company. An aspiring novelist and flight attendant of over twenty years, Jan is eager to abandon her old career and the painful life choices that led to it. With Bonnie, her aging Corgi, in tow, she now travels to Chicago for a prestigious writer’s retreat, seeking to blunt the news of her retirement among colleagues and passengers alike. When Tony (Sam Breslin Wright) the plane’s captain, quickly foils these efforts, Jan must manage a challenging last workday and the responses of co-workers Grieg (Grieg Sargeant) and Leeann (Ceci Fernandez).

As the play and flight progress, familiar travel tropes give way to characters’ backstories and complicated personal dynamics. Rhapsodizing about vintage travel and passengers’ lost items, Grieg’s nostalgia belies a deeper hurt over Jan’s secrecy and a longing for the simpler times they shared. As Tony swaps cockpit banter with co-pilot Eric (Federico Rodriguez), we discover his poorly masked alcoholism and ill-fated affair with a childhood sweetheart. Meanwhile, Eric and Leann’s romantic history breeds conflict as the former lovers’ tension puts both their jobs at risk. As literal and figurative turbulence mount, the flight crew must face and adapt to the bumpy paths before them.

Steeping us in the world of the plane, Meredith Ries’ set forms a running joke on the many quirks of air travel. Sporting Smelta-logo lanyards, NYTW’s ushers seat us zone-style and dispense Biscoff cookies and Mott’s tomato juice. Actors push rolling carts down the aisles as overhead monitors broadcast flight updates and old rom-coms. Chipper movement sequences mimic airlines’ notorious safety videos. Common inconveniences such as crying babies and patchy Wifi make their appearances, but fortunately for the motion-sick, turbulence is only implied through flashing lights and the actors' physicality.

Though long-form riffs on plane travel can risk cliche, Bent’s script skillfully balances situational humor and poignant insight. The airplane becomes a microcosm of humanity: watching in close vantage as characters stumble through familiar hurts, triumphs, and musings, we see our own precarious hopes and fears reflected. Ultimately, Bonnie’s Last Flight reminds us to embrace the journeys on which we find ourselves and the people with whom we share them. Imperfect though the means and company may be, it's worth it to reach our destinations. And if you're lucky, you just might get an upgrade.