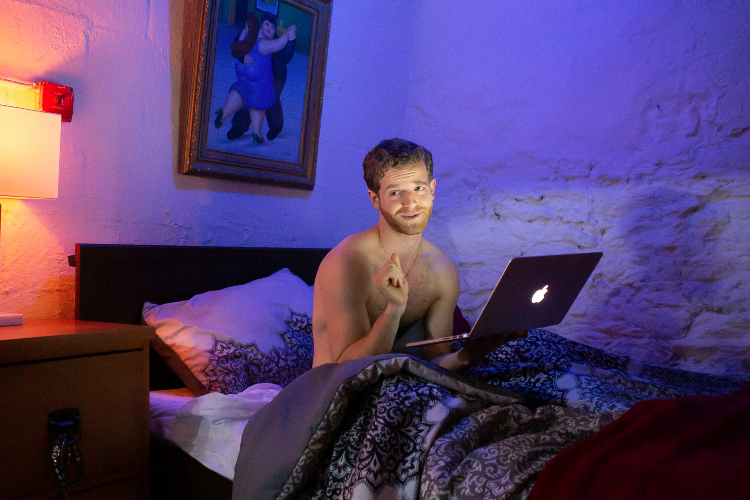 BOTTOM LINE: The confessions of a gay escort, told in an intimate, site-specific setting.

As he tells us before he even gets out of bed, 24-year-old Tyler “did a very shitty thing.” It’s not hard to guess that the details of this thing—what he later calls “the Event”—will become our main event as well, but like any good rent-boy, Tyler knows how to pace out his evening.

After explaining what goes into his backpack each night (Tyler unpacks it when he gets home—he must be a Marie Kondo fan), Tyler veers into a memory of Craig from high school, then to James from a gay bar, then to Roger from Ridgewood. It’s easy to get the bland white-boy names confused, but perhaps this is intentional, or at least inevitable. Tyler seems less concerned with baring his soul, or even with painting detailed portraits of the people in his life—he’s more interested in strategically crafting our perception of him. Sure, he will tell us about the Event. But he will also attempt to convince us—and of course, himself—that he probably couldn’t have done much to change anything.

As played by the deceptively subtle Brendan George (who alternates with Eamon Yates in the role), Tyler epitomizes the arch, all-knowing homosexual who never takes anything too seriously. In George’s hands, Tyler commands the room, and (at least the night I went) manages to weave every man in the audience into his narrative. If at times we might want Tyler to show just a bit more feeling when rehashing various moments, this remove only helps heighten those moments when cracks start to appear in the emotional wall he has so carefully crafted. And when he gets to the Event, George—finally—doesn’t hold back.

Overall director Zach Carey shows a strong hand with his staging, aside from the one curious choice to have Tyler listlessly typing on his computer at the beginning—is he writing this story? Responding to clients? Chatting with someone? But otherwise, Carey makes excellent use of the intimate environment, and given that the script lacks stage directions, Carey’s choices at the end are especially haunting.

And kudos to designers Joyce Hahn and Max Ruby for their work—and especially to whichever one chose the strategic books on the dresser, a clever clue to the events that will unfold. The space feels intimate and full, but never claustrophobic (and the seats—mostly couches and upholstered chairs—all seem quite comfortable). And with his lighting, Jake Lemmenes excels at the difficult task of merging the reality of the site-specific environment with the theatrical demands of a solo show and a story that spans many locations and moods.

Ireland-Reeves (who also originated the role of Tyler) seems to be concerned with the purportedly corrupting effects of sex work: Tyler seems to have gotten so caught up in performing for clients that perhaps he has lost the ability to distinguish between fantasy and reality, right and wrong. In this light, Bleach seems a bit moralizing (well, as moralizing as a play about a gay hooker can be). Perhaps it’s a lot to ask for in 65 minutes, but it’d be nice to see a piece about gay sex (let alone gay sex work) that could find dramatic tension without resorting to the familiar crutch of drugs and violence.

But there’s another way to read Bleach—as commentary on the inherent alienation and violence of whiteness. From the robes and underwear hanging on one wall (and the walls themselves), to the identity of pretty much everyone in Tyler’s life, to the title of the piece, whiteness is a recurring theme here. While I’m not sure this is Ireland-Reeves’s goal, if it is, Bleach may well be the most fitting gay theatre piece for our time.