This show has closed. For more information visit here.org 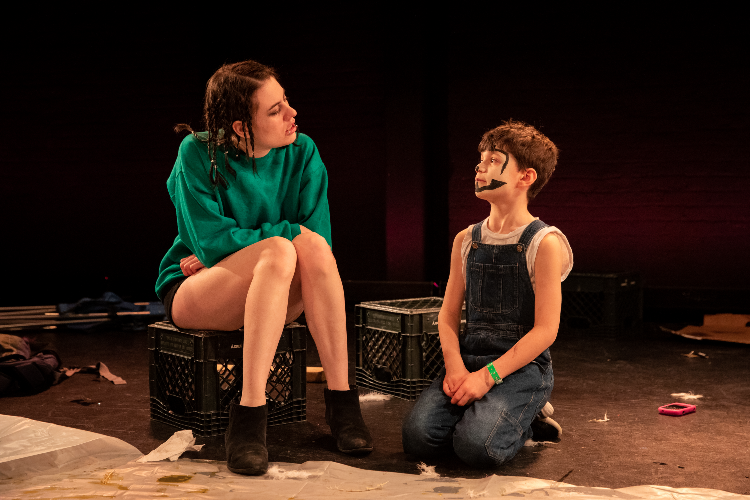 BOTTOM LINE: A look into the world of Juggalos, the lives of these hardcore fans, and the complex circumstances that bring them together as a "fam."

Jerry Seinfeld's eponymous TV show was famously described as “a show about nothing.” It's structured not around a plot, but around incidents of everyday life and the relationships that make those moments meaningful. In many ways, American Juggalo has a Seinfeld-esque structure. Nothing much really happens, and instead we simply observe a unique collection of people, larger than life but still familiar, for better and for worse.

Based on a documentary film of the same name, American Juggalo takes place on the final night of the Gathering of the Juggalos, the annual festival where die-hard fans of the band Insane Clown Posse (ICP) come together for four days and let their freak flags fly. The evening begins with a butt-chug and integrates drunken antics with heart-to-heart conversations as we are slowly introduced to six members of the "fam," their lives, and their absolute, unwavering love for the life of the 'Lo.

There’s a rhetorical challenge at the heart of the play, as well: the Juggalos have been classified as a gang by the FBI since 2011. The subculture’s association with violence, as well as white supremacy, drug use, and crime, are running themes in the play and in the lives of Juggalos in general. Poverty, class, race, and ostracism play a big role in their stories and demonstrates how the Juggalos use their subculture as both an escape from the everyday and, for some, a community of real support. As such, the play occasionally drifts a little into defending the Juggalos and insisting they're "not like that," but grapples meaningfully with the fact that some of their members very much are.

Writer Sean Pollock, building on the material from the film, has done exhaustive research and portrays his subjects with sensitivity, kindness, and respect. The semi-documentary structure tends toward monologues explaining someone's life story and the play is prone to the problems of that genre, in that it sometimes is stilted and narratively flat. The conversation never lags, but it also meanders in between outrageous pranks or heartfelt speeches. The conflict that occurs feels less organic and more manufactured to advance to the next monologue, but the insights generated by the characters are deep and felt.

The Juggalos themselves are well-rounded and demonstrate an important cross-section of the subculture, but also stand out as people in their own right. The cast’s rapport is strong; the acting is compelling and everyone has clearly done their research. Niara Seña offers a particularly solid performance and challenges Linus Gelber's old-school Juggalo, Jester, with a dynamic presence. Took Edalow plays Maniac; it's to her credit that when Jester tells her, “I’ve known plenty of girls like you before,” the Juggalos sitting next to me in the audience responded, “Yeah, me too.” Helping to build the onstage world, Alexandra Pfeifer's set design is appropriately weird, in the construction of a familiar makeshift garbage-pile-music festival vibe, and lighting designer Anna Schultz has created one of the better trash can fires I’ve seen.

Overall, American Juggalo is an engaging look into a world very far from New York City that brings light to the complexities of life for outsiders of all kinds. The narrative of "nothing much happens" is a workable vehicle for the complex portrayals of the subculture and where it skimps on plot, it makes up in education and skillful performance. While not quite immersive, the play is transporting in every way.