This show is now closed.

For more information check out nyuskirball.org

By Frances Poet; Directed by Cora Bissett
Produced by the National Theatre of Scotland 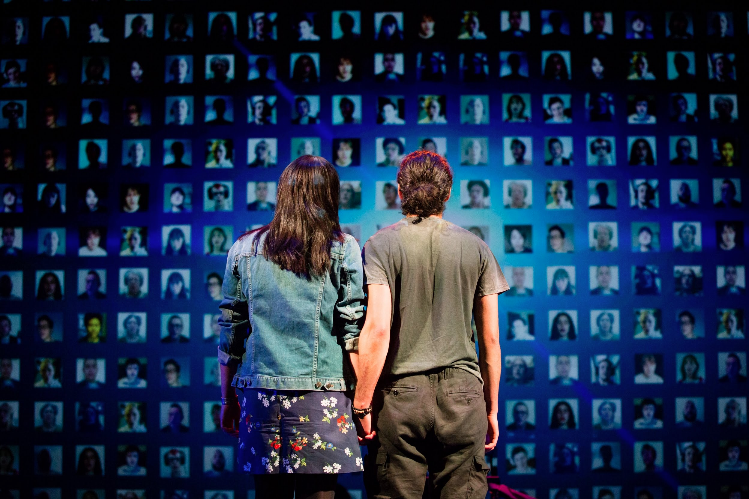 Rehanna MacDonald and Adam Kashmiry with the Adam World Choir in the background. Photo by Sally Jubb.

BOTTOM LINE: Visiting from the National Theatre of Scotland, Adam is kind of a one-person show for two actors about a transgender Muslim man and his discovery of identity.

Frances Poet’s play about the life of its star actor Adam Kashmiry unfolds in much the same way as a classic coming-of-age story. An out-of-place Egyptian Muslim boy is trapped in the body of a woman, sometimes played by Rehanna MacDonald and sometimes by Kashmiry himself. We see various scenes of his self-discovery—through the internet, hormones, playing dress up, discovering that he is not a lesbian, and most brilliantly through a video chat with his conservative mother (a tremendous Myriam Acharki) who is shocked to see Adam with a beard, but by the end of the chat accepts his new name.

Where Poet’s play succeeds is in the nuance it explores regarding the complicated journey of Kashmiry as an Egyptian, Muslim, transgender man, growing up in Scotland as a performer. Kashmiry and MacDonald make a lovely pair and plunge some pretty terrifying depths of self-harm while also navigating some livelier moments exploring friendship and, later, a romantic relationship.

The two actors are joined by the much-hyped Adam World Choir, a global digital community of transgender and non-binary people. The choir makes two appearances in the show, first when Adam discovers himself through online chat rooms and message boards and second in an “all-is-right-now let’s-ride-off-into-the-sunset moment” at the end. The choir is enchanting and haunting and provides a kind of counter-religiosity to Adam’s problematic relationship with Islam. For all of this majesty and power, it is sad to see the lyrics reduced to something as simple as “We are Adam” and “Can the soul of a man be trapped in the body of a woman?” on near repeat. By the nineteenth refrain, we get it.

Adam is an elegant, slick production. Emily James has concocted a racked scenic design with drawers and pockets that pop up whole scenes in an instant. With little effort we are transported to a porch, a bedroom, a dress shop, and bathroom. The precision is often matched in Cora Bissett’s direction but falls short when this specificity is betrayed with new locations for scenic elements already established. A critical moment with Adam’s father on a set of stairs becomes a new location later in the play in a confusing bit of oversight. And at least at the enormous Skirball Center, Adam seems to be asking for a smaller venue as it struggles with audibility in this unplugged version.

Joining a parade of stories exploring trans identities, Adam falls short of offering much new on the subject. But this work from the National Theatre of Scotland is worth checking out nonetheless.

The cast is Adam Kashmiry and Rehanna MacDonald with a video performance from Myriam Acharki.