By Floriana Frassetto
Produced by Mummenschanz 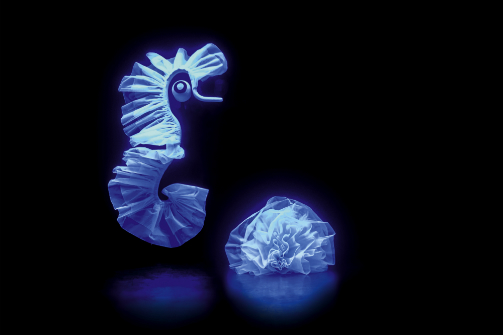 A scene from Mummenschanz's You & Me. Photo by Marco Hartmann.

BOTTOM LINE: The silent musicians of Mummenschanz return to New York City with another highly imaginative, enchanting show that magnifies the world with childlike wonder.

What do we think about when we think about the Swiss? I think of their fine watches, and chocolates, or perhaps the UN, and the snowy mountains that inspired Mary Shelley to create Frankenstein 200 years ago, and then generations of heavy metal musicians.

I also think of Mummenschanz.

I was first introduced to the pantomime troupe’s wildly imaginative work almost 10 years ago, and it has since become a defining influence and constant inspiration. "Mummenschanz" is German for mummery, which means a mime artist. Calling themselves the “silent musicians,” the troupe is known for their whimsical sketches performed in utter silence other than some occasional musical elements when they are part of a certain piece. Their large scale, mixed-material puppets and props are crafted often, if not solely out of household materials: wires, egg cartons (their egg-carton owl face is to this day one of my favorites), foam boards, piping tubes, an assortments of trims and fabrics. A set of googly eyes, and sometimes just a well-placed fold and voila, a scrunched up face appears out of a pillowcase.

Returning to NYC where they first made their name in the '70s (during a three-year run on Broadway), Mummenschanz’s new show You & Me does not disappoint. It is a visual and cerebral feast for those of us who relish the experience of pareidolia (seeing faces in random objects). The scientific term does not do it justice. What You & Me explores is the troupe's most constant theme: what is it like to see the world like a child. The show powers forth from one sketch to the next without pause or additional set pieces: a piece of tulle attached to a piece of wire becomes a seahorse, and then it’s a swan; a pink plastic bag floats as elegantly as a jellyfish, dainty and exquisite. And then there are bigger jellyfishes: umbrellas covered with layers of plastic tarp pulsate across the stage and suddenly you’re in the little mermaid’s magical wonderland.

The oceanic creatures fade behind the curtain to introduce the only audience participation segment of the evening, when Floriana Frasseto (one of the founding members of the company) comes out wearing a blank sequin mask and invites audience members to draw faces on it. Her simple interaction with the audience is perhaps one of the finest clowning performances I’ve seen; without a single word or the aid of facial expression, she is able to command the entire room with the slightest movements of her body or the lack thereof, as well as the intentionally childlike drawn-on face enabled by the mutable mask.

The timelessness quality of Mummenschanz's work comes from the fact that they draw inspiration from the mundane, as children do; yet timelessness is also timely in You & Me. One of my favorite sketches of the evening is a choreographed piece with the ensemble playing “internet age zombies” obsessed with social media, selfies, and so on. Their iPads and smart phones (made out of wires bent into a square shape) soon transform into headphones, and eventually musical instruments with which they create a symphony of our current era.

After decades of creating, Mummenschanz has proven itself to be a force of originality that’s staying relevant without sacrificing a bit of their artistic identity. They are stubbornly staying childlike in a world that’s often too pessimistic and bitter. You & Me is entertainment at its finest because it brings people together: seniors and toddlers laugh together; people with various accents and ways of life cheer together at the gigantic pink balloon floating above them. Indeed language becomes unnecessary because no translation is needed for true joy.

You & Me is created by Floriana Frassetto.