By Mark Chrisler; Directed by Jaclyn Biskup
Produced by The Mill Theatre 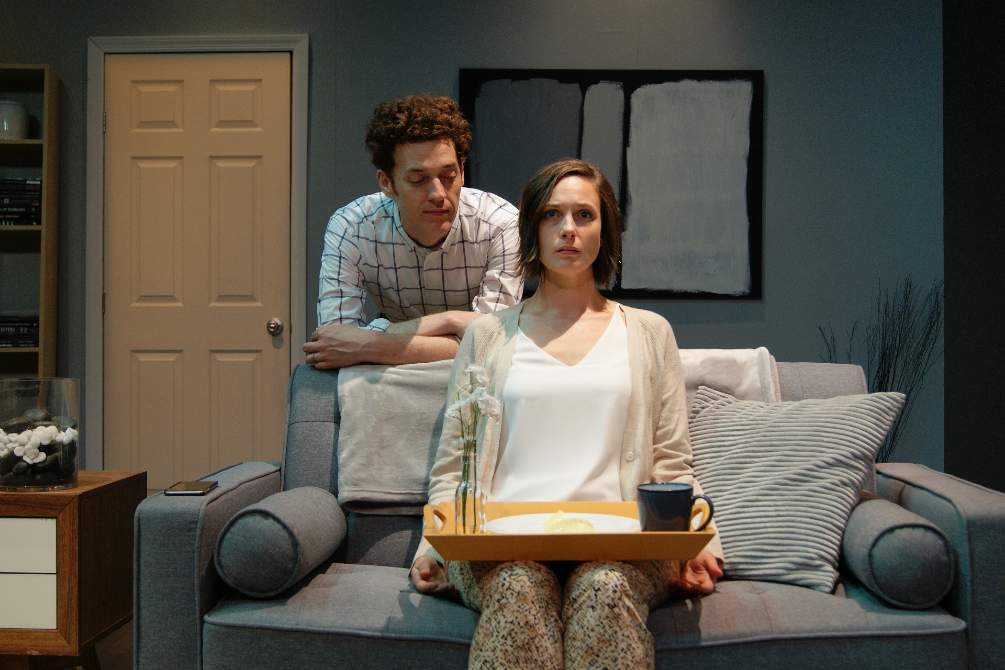 Braeson Herold and Shannon Marie Sullivan in Worse than Tigers. Photo Courtesy of The Mill.

BOTTOM LINE: An affecting look at one dysfunctional heterosexual marriage alternates between hyper-realism and absurdity to illustrate what happens when we distance ourselves from what we’re feeling.

Early in Worse Than Tigers, husband Humphrey (played with self-deprecating humor and tremendous emotional restraint by the excellent Braeson Herold) tells his wife’s macho lover Kurt (a swaggering, physically imposing, Zach Wegner), that he does not get angry. “It’s a negative emotion,” Humphrey explains. Indeed, Humphrey eats only egg whites, worries about cholesterol, and is everything that Kurt is not: patient, attentive, eager to please, and so damned boring that Olivia (a terrific Shannon Marie Sullivan), his wife of many years, is willing to flaunt her infidelity with Kurt in order to puncture her spouse’s always-calm exterior.

As Act 1 unfolds, police officer Kurt shows up on the couple’s doorstep, seeking a safe place to rest his weary bones. As he pounds and bangs his way into the hapless pair’s minimalist flat, a tiger—yes, an enormous, panting, just-escaped-from-the-zoo cat—is hot on his tail. Said feline has apparently broken out of its cage and is now roaming the streets in search of food. Facebook posts inform Olivia and Humphrey that the animal has already eaten one of their closest college friends and, if Kurt can be believed, the beast is eager to make him her next meal. Once inside his mistress’s tastefully furnished, black, white, and grey one-bedroom, Kurt towers over Humphrey and hunkers down, making no secret of his intent to screw Olivia while Humphrey takes the couch. For her part, Olivia seems like a cavalier spectator, but one who is nonetheless turned on by the lurking danger smack-dab in the living room.

Throughout the threesome’s glib back-and-forth, brief black-outs separate scene from scene. It’s an effective way to punctuate what’s happening, and Kate Ducey’s lighting design is masterful, a wordless invocation of the lurking terror that exists both inside and outside the home. One scene utilizes flood lights and the jarring impact of this is an especially menacing reality jolt.

But if Act 1 is absurd, and maybe even bizarre, by Act 2, the mood has shifted. Kurt is gone, but the tiger is not. She—the play takes great pains to make sure that the audience knows that the tiger is female—has somehow found her way into Olivia and Humphrey’s bedroom, a feat that provokes a conversation both parties have long sidestepped. As pretense gets stripped away, an honest appraisal of the relationship, and the ways each person has hurt the other, zooms into focus. It’s raw and well-played.  Without giving away too much, let me just say that Mark Chrisler’s script addresses how we numb ourselves to keep from feeling anger, fear, grief, and sadness. In so doing, Chrisler suggests, we cut ourselves off from much of what makes human beings human.

If this sounds preachy or heavy-handed, rest assured it’s not. That said, Worse Than Tigers reminds us that, in actual fact, there is much in life that is far worse than tigers. Safety can be fleeting, while threats can emerge from three feet away.

(Worse Than Tigers plays at the New Ohio Theatre, 154 Christopher Street, through September 8, 2018. The running time is 1 hour 45 minutes. Performances are Tuesdays through Saturdays at 8. Tickets are $25, $20 for students and seniors. For tickets and more information call 212-357-3101 or visit themilltheatre.org and newohiotheatre.org.)