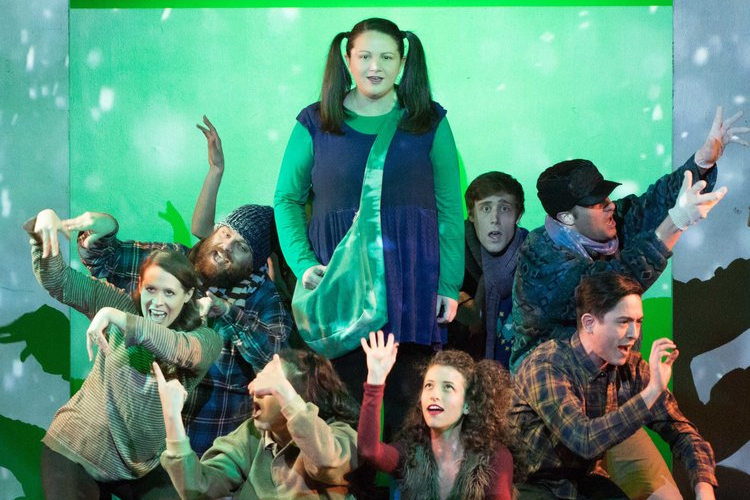 In one way, at least, I am the ideal audience for Wicked Frozen, the relentlessly silly but secretly tender-hearted musical playing Sunday nights at St. Luke’s Theatre. When I was in elementary school, I set out to write my own epic musical called Combo Platter!, which misguidedly brought together characters from Harry Potter, Star Wars, A Series of Unfortunate Events, and Garth Nix’s Seventh Tower fantasy series. Similarly, Wicked Frozen’s elementary-aged hero Adele (Kathleen Armenti) has written her own combo platter of a musical, which, as the sole member of Ms. Chenobell’s afterschool drama club, she insists upon performing for her teacher in its entirety in the midst of a threatening snowstorm.

Adele’s play, which she maintains is entirely original, charts the journey of Elsaba (also Armenti, sporting the green skin of Wicked’s Elphaba and the white glove of Frozen’s Elsa) as she harnesses her magic powers to fight the ever-encroaching heat of the villainous Cli-MAH-te Chan-JE (stepping into the role at this performance was the show’s bookwriter, lyricist, director, and choreographer Zoe Farmingdale). As Adele spins out this goofy tale, Miss Chenobell (the warmly perky Meagan Wells) begins to realize that the youngster may be using this mash-up of favorite characters to express her own existential fears and vulnerabilities.

Armenti is believable and often moving as a musical-loving child in crisis. The vocally versatile Bethany Nicole Taylor delightfully hams it up as Mistress Horrible while Vanessa Magula shows off her sultry voice as Nessawheels. Will Jacobs makes for a compellingly ridiculous, robotically vapid Prince Ikea (of the kingdom of Nordstrom). The free-associative tendencies of writers Farmingdale and Toby Singer lead to a charmingly bizarre number celebrating both the prince’s looks and the furniture store’s spaciousness—“I Get Lost in Ikea.” The ensemble, decked out in Jennifer Anderson’s appropriately familiar costumes, performs Farmingdale’s bouncy dances with gung-ho goodwill.

Farmingdale’s script gets a bit too hung up on the double meaning of “wicked” as a New England adverb (as in, “I’m wicked frozen”); most of the cast performs with heavy Boston accents. Little Adele’s attempts not to plagiarize are another running joke, this one somewhat funnier: “Let It Go” and “Defying Gravity” become “Don’t Hold On” and “Disobeying the Laws of Physics.”

A few moments require some deep knowledge of the cultural context around Wicked and Frozen—Adele’s name references John Travolta’s butchering of Idina Menzel’s name at the 2014 Oscars. But most of the humor doesn’t rely on anything other than a cursory familiarity with each show’s sources. If there’s any pointed satire here, it’s only in demonstrating the uncanny structural similarities between these two “magic ice witch princess” musicals. And although Wicked Frozen has some naughty language—it may not be for all families—the 10-or-so-year-old down the row from me seemed to be particularly delighted by the name of Elsaba’s university: Shitz.

The premise that elementary-schooler Adele has penned most of the score and script forgives some of the sense of hasty, though jovial, composition of the intentionally imitative songs (composed by Toby Singer, with lyrics co-written with Farmingdale). When that same parodic instinct bleeds out into the “real world”—Miss Chenobell also has a Frozen-inspired number (and is, of course, named after Kristin Chenoweth and Kristen Bell, stars of the original Wicked and Frozen)—the show begins to feel a little less shrewd and a little more slapdash.

Still, what resonates most about Wicked Frozen aren’t the hit-and-miss absurdities but the ways in which the show celebrates the impact of musicals on young people. For Adele, the show that she’s created isn’t parody at all—it’s a tribute to two stories, each with a pair of unlikely heroines, that have allowed this fish-out-of-water kid, as long as she has someone listening to her, to defy gravity.