Upstander Bystander: From Camp to Camp

By Laurence Bohec; Directed and Adapted by Maria Stefatos
Produced by Colibri Productions
Part of the 2018 FRIGID New York Festival

Off Off Broadway, Play with Music
Runs through 3.4.18
Kraine Theater, 85 East 4th Street 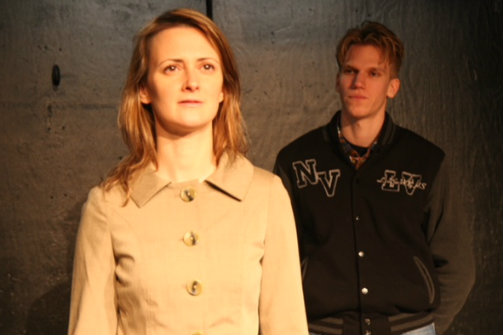 Géraldine Dulex and Terence Schweizer in a rehearsal for Upstander Bystander: From Camp to Camp.

It’s hard to know where to start and where to end with a problem like this. Human history is so wrapped up in hate and fear that, all too often, we begin to embrace those feelings, forgetting our common humanity. Laurence Bohec's Upstander Bystander: From Camp to Camp is a poignant, thoughtful play about the difficult times we find ourselves in again and again, and the questions we have to force ourselves to keep asking.

The story starts in a modern day refugee camp, with a woman (Samantha Wendorf) desperate for answers that may never come. She is joined by a Holocaust survivor (Sophie Max), a Nazi officer (Géraldine Dulex), and a WWII German soldier (Terence Schweizer), and all four commune across time and space to share their stories with us and each other. What we begin to see over the course of the show, of course, is that their tales of suffering mirror one another more than they (and we) might realize.

There is a lot to like here. I have to mention the beautiful original compositions written and performed by Raffi Froundjian. The accompaniment throughout really helps to transport the audience into the world of the play. The music also gives a lot of support to the cast, who deliver unflinching performances across the board.

The strength of Bohec’s writing is in both its simplicity and its profundity. She doesn’t let the audience slide into the comfortable position of siding with the prisoners and demonizing their oppressors. Every character has the same questions, regardless of their station: What did I do to deserve this? Do I have any choice? Who is to blame? All of them are human beings first, and the presentation of this point of view is the greatest accomplishment of the piece.

I highly recommend Upstander Bystander to anyone who has ever struggled with questions that have no right answers, or wished there was a little less hate and a little more love in the world. It’s a great reminder that there’s far more that links us all together than could ever divide us.

Upstander Bystander: From Camp to Camp is by Laurence Bohec. Directed and Adapted by Marisa Stefatos. Lighting Design by Matthew Deinhart. Music by Raffi Froundjian. Stage Manager is Lesley Wolf.