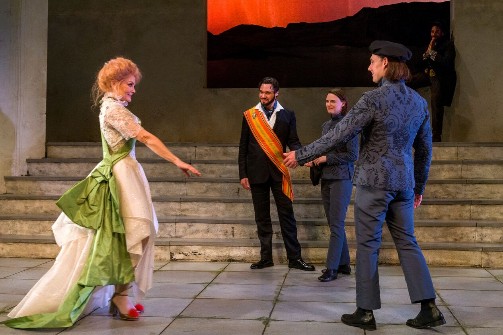 BOTTOM LINE: In Maria Aitken's production of one of Shakespeare's best-loved comedies, love is humiliating, brutal, and bittersweet to the very end.

Critics don't usually consider Twelfth Night a "problem play," meaning one of the Shakespeare works that sits awkwardly between comedy and tragedy. Nonetheless, Maria Aitken and the Acting Company have pulled something delightfully awkward and unpleasant to the surface in their production, diving into darker themes usually glossed over by wilder, more charismatic takes on the story. One might almost call its ending tragic, as the characters' inherent conflicts and defects remain unresolved, and love fails to conquer all.

Such a nuanced message is only possible because the cast delivers on the Acting Company's promise of excellent text work, playing their parts with subtlety, clarity and smoothness. The text continues to shine through as actors strive to connect across a grey, squared-off stage, full of steep stairs and underused nooks and crannies, and work through big hairpieces and sculptural costumes, designed to isolate and impede movement (without veering toward the operatic or experimental). Each character slogs on alone, awkward, and aware of exactly how ridiculous they look in their quest for love.

Aitkin's production remains remarkably individualistic, allowing each actor's performance to shine distinctly from the rest. Stephen Pelinski's Malvolio benefits the most from this approach, as his serious, lonely monologues are accompanied but never eclipsed by the giggling, scheming comedic foursome of Sir Toby Belch (Lee. E. Ernst), Sir Andrew Aguecheek (Michael Gotch), Fabian (Mic Matarrese) and the wry Maria (Kate Forbes). Malvolio's scenes are unhurried and powerful, drawing out pathos and humor which livelier, more colorful productions of this play (for example, the 2017 production by the Public Theater's Mobile Unit) are seldom able to access. (A special shoutout to Malvolio's hairpiece, which I overheard a fellow audience member describe as "very David Lynch.")

The show plays up the contrasts between its pairs of lovers. Viola, a.k.a. Cesario (Susanna Stahlmann) is a witty, savvy woman in disguise as a man, and uncomfortably in love with the impulsive Duke Orsino (Matthew Greer), a misogynistic, overgrown puppy with zero self-awareness—he actually waves a gun around the stage in an attempt to win Olivia's love (guns and fencing foils share the stage, anachronism be damned). Viola seems to be aware of his defects, too, which adds frustration to her devotion. Their mismatched attraction is crystallized brilliantly as Orsino wallows in lovesickness for Olivia, listening to a song by Feste (Joshua David Robinson): he pulls the anxious Cesario closer and closer into an sweaty overwrought embrace on a park bench more properly accompanied by tinny music in a gymnasium than by a swell of strings. As for the play's other couple, Elizabeth Heflin leans into Olivia's helpless contradictions, brittle and bullheaded as she wavers between taking charismatic command of her household and making embarrassing passes at an unwilling young "boy." Sebastian (John Skelley), Viola's assumed-dead twin who stumbles into this confusion, is stalwartly cheerful and a bit dim.

When opposites attract, Aitken reminds us, happiness is never guaranteed. Still, this production of Twelfth Night is not without hope: Sir Toby Belch and Maria approach each other with the kind of tentative respect that bodes well for a future together. More minor characters remain blissfully out of love and unaware of their silliness (Michael Stewart Allen's unflappable priest is a ray of sunshine). But with the play's final, wistful image, one is left to wonder if all the happy love-matches made onstage have been anything more than "matter for a May morning."