Written by Irvine Welsh; Adapted by Harry Gibson;
Directed by Adam Spreadbury-Maher with Greg Esplin
Produced by Brass Jar Productions and James Seabright,
with Kings Head Theatre and In Your Face Theatre 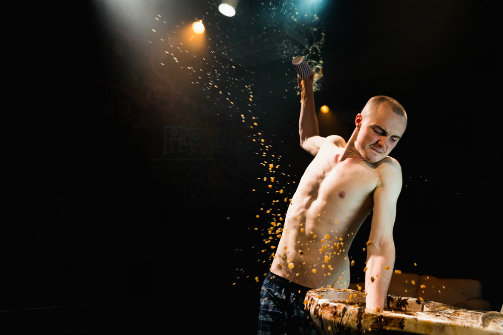 BOTTOM LINE: A wild ride through the heroin scene of late 1980's Scotland, Trainspotting Live is an immersive theatre experience that grabs you by the hand and asks you to party till you drop.

It's summer in the city, the perfect time to go on a little adventure, to have a trip. But what kind of trip do you have in mind? For lovers of innovative and compelling theatre told by a vibrant team of artists, the best trip in the city right now is Trainspotting Live. Based on the Scottish author Irvine Welsh's novel (also adapted into the popular 1996 film by Danny Boyle), and adapted for the stage by Harry Gibson, this immersive stage play is structured to mimic the seismographic arcs of a drug trip.

As you enter, a rave is in full swing. Standing in a hallway lovingly graffitied with cute insults and Scottish slang, the pounding rhythmic music hits you before you even enter the door. Inside, you're confronted with glowing neon, flashing strobes, and people who are a bit too overjoyed to see you. The walls are covered in even more intricate graffiti, making you feel like you've stepped into the seediest underground nightclub, complete with lasers and fluorescent tube lights and what looks to be a feces-covered toilet. Cast members never stop dancing as they lead you to your seat, where for the next 75 minutes you will witness their absolute highs and terrible lows.

Mirroring the novel's form as a collection of stories, Trainspotting Live consists of snapshot scenes of the characters’ lives as they traverse the landscape of addiction in late 1980’s Scotland. Our main point of contact is the young heroin addict Mark Renton (played with delightfully devilish energy by Andrew Barrett) as he shares with us his experiences as a user. The most heartfelt moments come during the scenes with Renton’s mates Tommy and Sick Boy (played by Greg Esplin and Tariq Malik with intense and brutal sincerity)—as the trip turns darker, the show begins to grapple with the steep costs of addiction.

This is truly an ensemble piece, with most of the actors playing various roles to flesh out Renton’s world, showcasing their flexibility as they slip easily from distraught mother to snooty job interviewer to drug-crazed dealer. The ensemble constantly interacts with the audience, directing the text directly to us, jumping into seats, and improvising riffs based on specific audience members. This complete lack of delineation between the stage and the audience demands our full investment and turns what might normally be a passive viewing experience into something that feels more holistic and all-encompassing.

Watching heroin addiction dismantle lives in such a visceral way is especially hard-hitting considering the current opioid crisis. But Gibson and directors Adam Spreadbury-Maher and Greg Esplin do an excellent job at balancing the light with the dark. The dark humor ranges from situational to slap-stick scatological, but there is always a cost. As this cost escalates from silly sexual dysfunctions to lives lost, the piece flows organically from levity to hopeless despair, until it finally is able to rest somewhere in between.

The success of this emotional journey, especially in only 75 minutes, speaks to the high level of excellence presented by every member of this creative team. From Spreadbury-Maher and Esplin’s direction to the practical effects to the design by Clancy Flynn (lighting) and Tom Lishman (sound), this production grips you from the second you enter and never lets go.