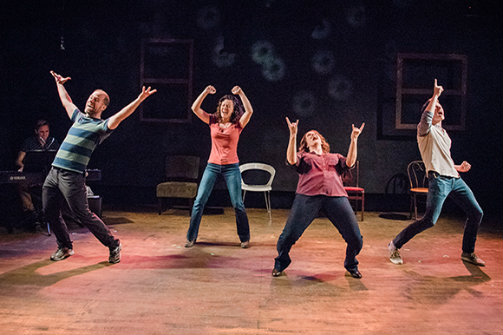 BOTTOM LINE: This revival of the comedic yet heartfelt musical that chronicles its own creation makes for a fun night out.

You can’t really describe [title of show] any more accurately than it describes itself: "a musical about two guys writing a musical about two guys writing a musical." This hilarious one-act by Hunter Bell and Jeff Bowen follows semi-fictional versions of themselves and their two (sometimes three) close friends as they develop, of course, that very musical. We get to peek behind the scenes from the moment of its conception, to the three weeks of writing for submission to the New York Musical Theatre Festival, all the way through its subsequent stage life both off, and then on, Broadway.

The script is clever, funny, a bit raunchy, and full of admiring nods toward some classic (and less than classic) musicals. Although the story takes a little while to get going, the show eventually finds a pleasant comedic rhythm. The music is mostly upbeat and conversational, the writing is very self-aware, and honestly, the struggle is real. Especially as a fellow "theatre-person," it’s cathartic to watch a small group of friends build something great together.

The friendship and strain between Jeff (Jason Moody) and Hunter (Jeffrey Scott Stevens) as they write against the clock, and then corral their friends Heidi (Chelsea Barker) and Susan (Jennifer Swiderski) into joining them on stage, all feels quite authentic and is a joy to watch, thanks to the energetic performances of the company. It's clear that the whole cast (which also includes Christopher Lengerich as Larry, the team's unsung, if not always unsinging, pianist) has a great time playing their parts. Thanks to Scott Guthrie's direction, there are also bits of physical comedy as well as a few neat choreographic moments that the actors really throw themselves at. While the cast could, at times, blend better in their singing, and balance better with the keyboard (there is no music director credited), this shouldn't detract much from your overall enjoyment.

[title of show] is a musical about artists and, in a way, its for artists, but there is still a lot there for someone who might not get all of the musical theatre references. It’s a simple story—with lovable characters and an intimate feel—about pursuing your dreams and realizing your goals. I would recommend it to anyone looking for a fun night out with some good music and a little heart.