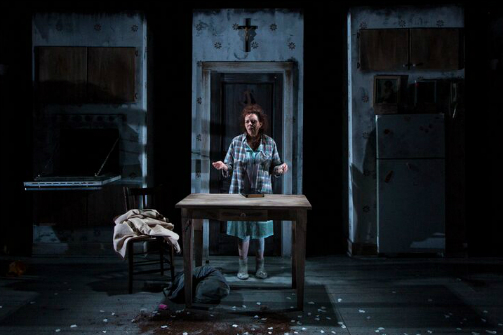 BOTTOM LINE: Although Deirdre O’Connell gives a tour de force performance as a magnetic matriarch, other aspects of this Southern Gothic production are not as up to scratch.

As a person nears death, there may be a final reckoning. This idea rings true in Monk Parrots' production of Gabriel Jason Dean's Terminus, directed by Lucie Tiberghien. Although the magnificent Eller Freeman once ruled her family with a steady hand and a resolute will, only vestiges of her former greatness remain as her body and mind battle unsuccessfully against age and dementia. Supporting her both emotionally and financially is Jaybo (Reynaldo Piniella), her bright grandson who has dropped out of school to work as a fry cook.

In order to help Eller’s memory, Jaybo papers their dilapidated home with family photographs including handwritten captions like “R.I.P.,” “Alive and Kicking,” and “S.O.B.” Through this, we learn about Eller's marriage to a black man in the Jim Crow south. Jaybo and Eller’s routine changes suddenly with the arrival of Finch (Vanessa R. Butler), a pansexual hobo runaway who allows Jaybo to think of a life beyond his circumstances, while Jaybo’s drug-running father Bones (Mat Hostetler) returns to sell their condemned home. This, coupled with visions of deceased family members, forces Eller to dig up the dark past that she has worked so hard to forget.

While the premise of Terminus is dramatic and compelling, the production struggles to portray the story effectively. Although the creative scenic and lighting design (D'Vaughn Agu and S. "Stoli" Stolnack respectively) greatly support the setting and tone, Tiberghien's staging of character interactions across opposite ends of the wide stage feels like being caught in the net of a ping-pong match. An intense scene of music and memory is lost as our attention is pulled from one end of the home to another, creating a near whiplash-like effect. And in this set-up, the booming gospel music confuses, rather than enhances, the words being spoken. The dramatic plot is also bogged down by improbable characters, including Finch, whose weak chemistry with Jaybo makes their relationship feel awkward instead of endearing.

Nevertheless, stage veteran Deirdre O’Connell's dazzling ability guides the production as true as a beacon of light. The role seems tailor made for O’Connell, who truly relishes and revels in exploring the emotionally complex Eller. One of the best scenes is when Eller, in a moment of clarity, reminisces happily about her rebellious past with her new hobo acquaintance, while another includes her intense foray into the darkest parts of the human experience. Her performance is an absolute masterclass in acting.