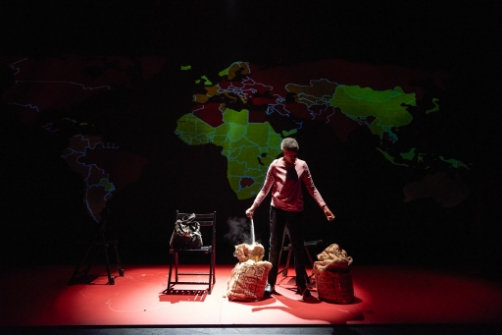 BOTTOM LINE: Robbie McCauley performs a profoundly personal odyssey through time, including her lifelong struggle of "living with a little bit of sugar."

As Robbie McCauley rummages through her large handbag, she pulls out some chocolate and comically goes through some trouble to open it. I trust this moment is a genuine slice of her fascinating, winding life. McCauley, a diabetic, lives with a little extra sugar coursing through her arteries. Sugar, the titular subject of the play, is described to be “complicated, like love. It gives you energy; it can eat you up too.” And as McCauley chews on her chocolate bar, her gentle words pull you into her story, a pianist echoing her thoughts.

A few scattered chairs are configured into various spaces as we follow her from the segregated South of the 1940s and 50s, to New York City in the 60s, during her glory days performing in For Colored Girls Who Have Considered Suicide/When the Rainbow Is Enuf, working with people whose names more of us probably should know. McCauley also brings up the fact that she’s worked with Samuel L. Jackson, perhaps to put things into perspective. A chronicle of McCauley’s life through the double lenses of race and diabetes, Sugar is like a gentle stream, beneath which a powerful current runs parallel to both the artist’s experiences and the socio-political shifts she has witnessed. McCauley speaks of ordinary occasions throughout her life as if composing poetry with breaths; the ardent simplicity is moving.

Sugar expresses its grand ideas in concrete, tangible ways—“I got memory in my body.” For McCauley, her body becomes a time capsule because of the hypersensitivities caused by her illness. One recurring concept is how the 3Ds of diabetes—depression, denial, and drink—both burden McCauley and set her life in motion. McCauley’s lived through war, one against her body. There’s also the war against people of color: McCauley describes how Krispy Kreme ("Krispy fucking Kreme," it rails her up indeed), sneaks its way into African American neighborhoods, as if there’s an agenda to keep the community oppressed through junk food that leads to diabetes and heart disease.

McCauley shares those memories, some painful and some full of sorrow, with a permanent levity. She speaks of a time of “gentler drugs and righteous rage” with a tinge of nostalgia, disapproving the presence of “crack cocaine and anger without a cause.” Her gentle presence in the space demands undivided attention, and she achieves it with minimal effort. It all feels like she’s simply having a chat with you on the front porch, with the kind of powerful ease of someone who’s been through hell, but has survived with dignity.

I had never thought of sugar in a way that’s menacing, never thought of the mundane powder as anything more than a basic ingredient of, honestly, all things positive. Robbie McCauley ruptures this ignorance in a way that’s honest, superbly genuine, and not the least bit contrived. “White racism is like diabetes,” she says. “You can be born with it, but you don’t have to die from it. It can be managed.” Indeed, she still manages it, like she manages her diabetes. Her story continues. “Everybody breathing gets old—but I’m not dead yet.”

Sugar is written and performed by Robbie McCauley. Directed by Maureen Shea. Music by Chauncey Moore. Projections by Mirta Tocci.