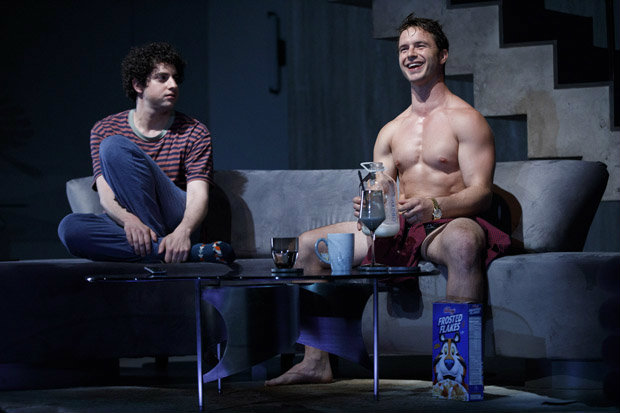 Eli Gelb and Will Brittain in Skintight. Photo by Joan Marcus.

BOTTOM LINE: A satire lacking in self-awareness...but look, there’s a hot guy in a jockstrap!

John Keats famously wrote “a thing of beauty is a joy forever,” to which playwright Joshua Harmon might contest: “until it’s not.” At least that’s one would guess from his sardonic take on fading beauty in Skintight, a play populated with characters as chiseled as they are shallow. Idina Menzel leads the cast as Jodi Isaac, a 40-something divorcee who arrives at her father’s luxurious West Village townhouse with the excuse of celebrating his 70th birthday, but truly only wants to mourn her dead marriage (her husband left her for a 24-year-old with fake breasts). But if Jodi wants not to be reminded of the greatness of youth, she’s barking up the wrong tree, as her father Elliot (Jack Wetherall), a famous designer, has taken up with a 20-year-old lover with abs of steel and a brain of hay, called Trey (Will Brittain).

Jodi fails to understand why the men in her life are so eager to throw away their adult lives to shack up with partners barely out of their teens, and through her plight, Harmon continues the existential questioning he started in Significant Other, in which a single gay man wondered why all his girlfriends found husbands while he remained alone. Like Jordan, the whiny lead of Significant, Jodi never once considers the idea that maybe her problems are her own making, instead choosing to blame fate, circumstance, and her upbringing.

In Skintight, Harmon paints a tableaux featuring the various ages of men: there’s a greying gentleman, two 20-somethings (Jodi’s son Benjamin arrives halfway through the first act), and Jodi as the middle-aged sample. The problem is that Harmon gives Jodi this task while perpetuating the narrow-minded vision of women he first displayed in Significant Other, in which female characters had one of two purposes: fag hag or nag. Jodi’s actual purpose in Skintight is rather insignificant (seriously, no pun intended)—she has no dramatic arc and is in the play exclusively to serve as the screen onto which all the men project their own neuroses.

This would be less obvious if the men in question were fascinating enough to distract us from all the casual misogyny. Instead we have a dimwitted Okie, a millennial stereotype, and most disturbing of all a Jewish man whose family emigrated from Hungary escaping Nazis, but who regardless has developed an obsessive eye for beauty as long as it comes in very light hues. Michelangelo’s David, the ultimate example of literal and figurative white male beauty, is used as the measuring stick to which most of the characters define what’s worth looking after. Elliot takes Trey to see the iconic sculpture, and Trey, with his limited cultural knowledge, realizes that by talking about the David, he can fake his way into a “serious” conversation with Benjamin, a queer studies major.

Whiteness is a recurring theme here. “They’re too white,” Elliot exclaims at one point, trying to explain to his daughter how the shirts he designed came out the wrong hue. He also might as well be describing the cast of the play he’s in, each one so light-skinned that they seem to blend into the oppressive pale greyness of the monochromatic set by Lauren Helpern.

And yet, if the purpose of the play was to satirize the homogeneity of affluent white people who rely on Botox parties to mitigate their ennui, Harmon takes these characters too seriously for Skintight to work as that. Trapped between thinking it’s an exposé of the 1%, while really being a celebration of white-gay-maleness, Skintight’s pivotal moment comes during a monologue in which Elliot explains to Jodi why he loves Trey so much. Comparing the young man’s skin to a fabric worth making sheets from, he praises his “corn-fed” features, and by the time he describes Trey’s beauty as being “from the heartland” you wonder how many MAGA hats he owns. No longer merely a Norma Desmond-type wanting to revive past glories through the beauty of youth, Elliot’s speech on eugenics as sexual desire truly makes the skin crawl.