By Sam Graber; Directed by Katrin Hilbe
Produced by ManyTracks in association with Theater Resources Unlimited 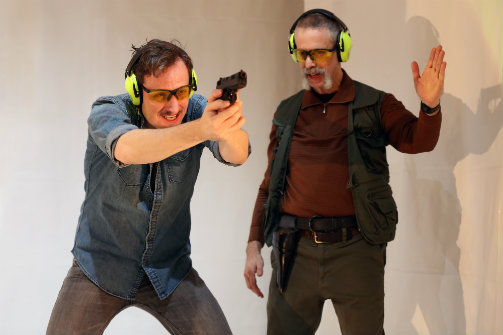 BOTTOM LINE:  A timely, but unsuccessful, look at the intersection of toxic masculinity and gun violence in the US.

Jim (played with barely controlled volatility by the excellent Ean Sheehy) is going through a rough patch: his wife has left him, his teenage daughter doesn’t want to see him, and he's lost his menial job. Not surprisingly, he’s a muddle of emotions, by turns angry, sad, and perplexed.  Adding to his angst, his childhood best friends are the epitome of American success: Alan (well-played by C.K. Allen) is a doctor and Ben-David (played with frenzied panache by David Perez-Ribada), is a lawyer. Although the threesome was once extremely tight, recent contact has left Jim feeling like a working-class nobody. He’s basically alone and isolated, stewing in grief and fury.

It’s easy to empathize with him, at least until Troy (a GI-Joe-like Michael Gnat) enters the scene. Troy teaches courses in marksmanship and Jim is an eager and receptive student. Troy is also sympathetic to Jim's troubles, opining that the ability to use a gun can give a “man back whatever he feels like he’s lost.” This assertion keeps Jim from examining his own complicity in his life’s unraveling, and in short order he becomes a devoted disciple to the macho Troy. When a second student, the teenage Gavin (Nicholas-Tyler Corbin), appears, the two depressed souls bond over their discussions about the disappointing twists and turns their lives have taken.

Later, a shooting at the local high school upends their newfound friendship and unsettles everyone in their unnamed town. On the day of the incident, quick action by Jim ostensibly stops a massacre. But why was he at the school in the first place? The scenario is provocative, forcing the audience to parse the distinction between hero and villain. To its credit, the script does not offer easy answers; at the same time, it touches so many themes—divorce, friendship, loyalty, parent-child relationships, personal responsibility, social class, and gun violence, among them—that the overall effect is dizzying and largely unsatisfying.

In addition, the play misses an opportunity to meaningfully challenge male entitlement. Had any of the characters questioned Jim’s assumptions—or their own—about heterosexual marriage, parenthood, or what it means to be male or female, it could have propelled the dialogue forward. Instead, the play is little more than a lament for bygone days when “men were men,” and women and children knew their “place.” What’s more, Jim’s possible heroism supports the idea that concealed carry laws are needed as protection from would-be killers. It's a troubling conclusion.

I don’t know what playwright Sam Graber wanted Shooter to convey, or even if he had a clear message. In fact, it's hard to know whether he supports arming civilians or not; as written, the ethics in Shooter around gun ownership, gun use, and gun violence are confused and confusing. But perhaps most unforgivably, Shooter sidesteps an opportunity to delve into the ways gender roles, sexual assault, male chauvinism, and gun violence intersect.

Indeed, it's hard to imagine a more opportune time for playwrights, directors, and actors to weigh in and add clarity and perspective to the discussions that are unfolding around these issues. Although Shooter misses the mark, I hope other writers and theater companies will seize the moment. It's time to act, in every sense of the word.

(Shooter plays at Theaterlab, 357 West 36th Street, through March 31, 2018. The running time is 90 minutes. Performances are Thursdays through Saturdays at 8; and Sundays at 5. Tickets are $25 ($20 seniors and students) and are available from theaterlabnyc.com or by calling 866-811-4111. For more information visit shootertheplay.com.)