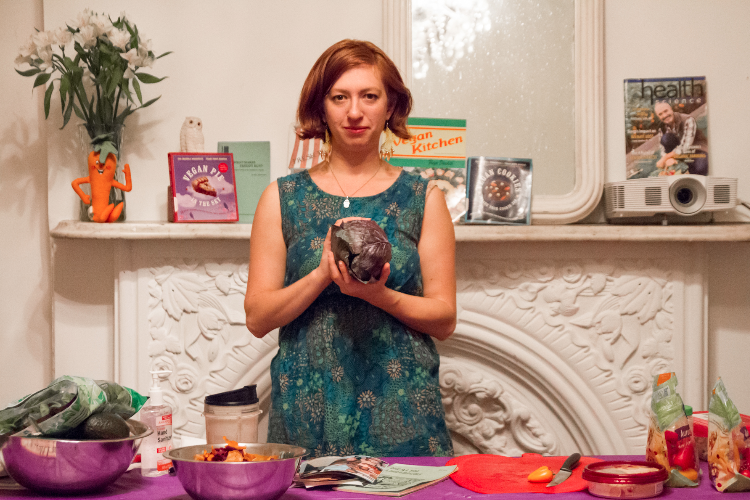 Lisa Huberman in The Prodigal Vegan. Photo by Jody Christopherson.

BOTTOM LINE: For a play about veganism, there is plenty of meat that is yet to be discovered.

As The Prodigal Vegan begins, the charming and endearing Lisa Huberman nervously begins to address her small audience, at times stuttering and keeping her eyes on the table in front of her, where she is preparing food. She seems surprised at the audience's warmth and enthusiasm for her and her vegan lifestyle. Huberman tells us she loves preparing food for people, and begins to share her experiences growing up as a vegan, daughter to a father who also grew up vegan in 1950s Ohio. With menus for the food she is preparing for us, we sit back to watch her chop vegetables as she meanders from subject to subject, often returning to variations on the same themes: it was difficult growing up vegan in Ohio; her dad grew up vegan in Ohio, in the 1950s; her parents (and grandparents) are ridiculously invested in the vegan movement.

What is most interesting is what Huberman isn’t saying. She skirts around vulnerable moments, over-explaining her need to prepare food for people while not addressing where that need comes from. She speaks about her difficulties dating, leaning into her veganism as if it were a risky life choice to make in 2018 New York City. Huberman shares that at times, she feels more excited about preparing her suitor’s food than the suitor himself. But instead of examining why this happens, she makes an easy joke about a hypothetical date: “Plating this food will get me off more than you ever could.”

Huberman speaks at length about her father. She holds him on such a high pedestal that he doesn’t seem real; I want to know more about this relationship. She describes her family as socialist vegans who view food as a means to live, and who are wary of indulging too much in food for fear of becoming addicted. Yet Huberman seems to be a true food lover. Expressing her passion for red cabbage, she admires the beauty of the vegetable and speaks about the joy to be found in chopping it. And she speaks at length about salad, indulging in every step of making it.

While preparing vegan food for an audience is a great gimmick, The Prodigal Vegan at times feels more like a supermarket demonstration than a one woman show. I wonder what would happen if Huberman were to step away from the kitchen table and out from behind the shadow of her father’s veganism. I want to hear that story.

The Prodigal Vegan is written and performed by Lisa Huberman. Devising Director is Michole Biancosino.