Pay No Attention to the Girl 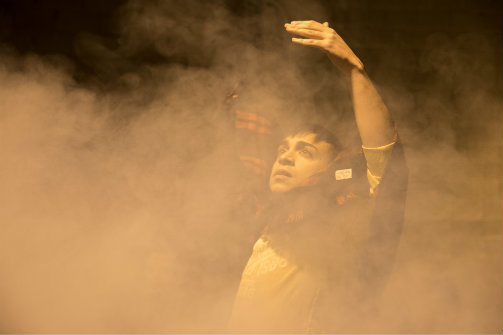 Aamy el-Noury in Pay No Attention To The Girl. Photo by Audrey Wang.

BOTTOM LINE: A creative reimagining of Arabian Nights in a brand new space.

Every theater company’s dream is to have a space to call home. For the 25-year-old Target Margin Theater, this elusive goal is finally achieved with a grand warehouse-like (former basketball court?) space they have named THE DOXSEE. Its kick-off performance is right in line with Target Margin’s mission to reinvent the classics and seek inspiration in history: Pay No Attention To The Girl takes the canonical One Thousand and One Nights and reframes it through the lens of a 21st-century ensemble. The result is an inquiry into the source material’s lessons and a heartfelt message about the power of storytelling and storytellers.

After being escorted into the decked-out house of THE DOXSEE, we are welcomed into the story we'll be traveling through. The King has been betrayed by his wife and is seeking a prolonged revenge. He has concluded that all women are the same and will therefore marry and kill all the virgins in the land. Well into this undertaking, he is introduced to Scheherazade, whose storytelling talent proves to be a literal saving grace. Each night she begins a new tale whose plot intertwines with a web of other complex stories. She ends her tales in cliff-hangers so enticing that the King will spare her to hear the end “tomorrow”. This goes on, as the legend has it, for one thousand and one nights.

In Pay No Attention, we are presented with a sampling of Scheherazade’s stories, linked together by the tale of a different King, whose favorite concubine swears that his son entrapped her into fornication. The son swears the reverse is true. This dispute foments a battle of the sexes, in which women illustrate the “malice, craft and perfidy” of men, and vice versa.

We are brought into different lands and times by the company who, directed with vision and vigor by David Herskovits, burst in and out of tales. They escort us through pages out of Scheherazade’s imagination and tell us of wily viziers, sex-starved wives, lost princes and forbidden doors. The ensemble’s standout performer is undoubtedly Caitlin Nasema Cassidy, who grabs our attention from the beginning. Her mastery of movement and song make her an ideal narrator for this play about the impact of storytellers.

It is clear that this cast has an almost academic grasp of the material. They know these tales, they have unpacked them and devised them into a show that is both entertaining and inspirational. At times, however, the plot lines are difficult to follow and I got lost in the back and forth of the piece. Though I felt taken care of by the earnest ensemble, it’s hard to sink in and connect when a piece is this stylized and devoid of vulnerability. Attempts to pepper in “like”s and “um”s and feigned forgotten lines felt forced and more of an artificial choice than a true moment.

Throughout, Herskovits experiments with focus and perspective. Some scenes take place right in the audience's faces, some all the way on the back wall. Every inch of the massive space is used expertly. The success of these moments is largely due to the brilliant technical team, whose use of sound and light are something to behold. “Sound Demon” Jesse Freedman plays with our expectations by creating magical opportunities for actors to whisper into our ears, though they are far away. Lighting designer Kate McGee creates spaces within spaces with her intricate light stories, ranging from harsh and jarring to yellow and inviting.

With song, dance, and talented storytellers, Pay No Attention to The Girl is inventive and fun. It leaves the audience anxious to see what Target Margin will do next in their new home.