Our Lady of 121st Street 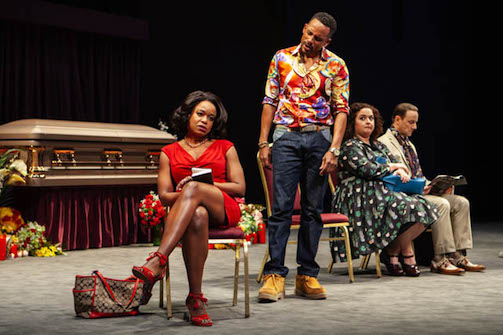 Sister Rose, recently deceased, was a saint to the children of Harlem and a fiend with a bottle of liquor. In Stephen Adly Guirgis' 2002 play Our Lady of 121st Street, some of those the sister touched are brought together for a hot-headed reunion as the body of Sister Rose mysteriously goes missing from its casket. The play consists mostly of two- or three-person scenes in which our characters, intoxicated and aggressive, fight so intensely that they are sure to exhaust themselves. Guirgis' script does find delicate, complex moments, though the characters will often undercut them with a punchline, and the comedic rhythm is back to its speedy pace.

With direction by beloved television and stage actor Phylicia Rashad, the show feels more like a live sitcom than a play. The set, designed by Walt Spangler, has three main "spaces": a confession booth, a funeral home, and a bar. Scenes feel as though they "cut" to one another, television-style. Even the dialogue creates a rhythm with the audience that feels like a laugh track. The dialogue rattles quickly, builds to a raunchy punchline, and then waits for the audience's reaction—often a laugh, sometimes a gasp.

Although this pacing is what audiences come to a Guirgis play expecting, Our Lady of 121st Street is not just a dark comedy about Sister Rose and the quirky mystery of her disappeared body. In gathering to mourn for her, these characters spend the length of the play mourning their own shortcomings and losses. An investigator (Joey Auzenne) mourns his lost son. A successful radio host (Hill Harper) mourns his failed relationship. A fiercely independent woman (Quincy Tyler Bernstine) mourns the loss of her naiveté. A gay couple on the down low (Jimonn Cole, Kevin Isola) mourn their concealed identities. A sweetheart apartment super (Erick Betancourt, a Guirgis repeat and powerhouse addition to the cast) mourns his loss of potential as a result of providing for his disabled brother (Maki Borden, who delivers a performance equal to Betancourt’s).

In showing us the ragtag cast of larger-than-life characters who turn out to celebrate and mourn the life of Rose, we see who Rose really is. She is an alcoholic. She is a sister and an aunt. She is a victim of domestic abuse. She is a teacher, helping others surpass the limitations of their disabilities. She is mysteriously disappeared from her own casket. She is Our Lady of 121st Street; the Patron Saint of Harlem. These are her loyal disciples.